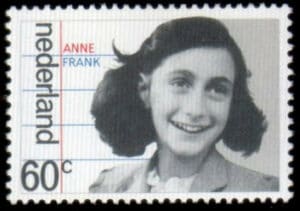 Anne Frank, a girl who wrote one of the most famous and best-selling books of all time – her diary. Witness of the time trough the eyes of a bright girl – a heartwarming story of growing up, love, desires, dreams, fears, hopes written in the most terrifying period of human history.

Here are some interesting facts concerning Anne, her life and her Diary.

1. Anne was a nickname

Anne’s full name was Annelies Marie Frank. She was born on June 12th 1929 in Frankfurt, Germany to parents Otto and Edith. She had an older sister Margot.

The Frank family went into hiding after Margot was summoned to a work camp in 1942. They spent two years hiding in the Secret Annex above Otto's offices.

The Franks were soon joined by Hermann and Auguste van Pels with their son Peter (the boy Anne was to fall in love with), and Fritz Pfeffer, a German dentist.

“How wonderful it is that nobody need wait a single moment before starting to improve the world.”

Anne received the diary for which she became famous on June 12th 1942, and began writing in it on June 14th. It was actually a red checked autograph book for which she decided would be used as a journal.

While in hiding, Anne hoped that she would one day be able to return to school, study the history of art and become fluent in different languages. She also wanted to become “a journalist, and later on a famous writer”. It’s not a surprise she switched to two notebooks after the autograph book was full, finally resorting to about 360 pages of paper.

Anne’s 14th and 15th birthdays were spent in the annex but she was still given presents by other residents of the hiding place and their helpers on the outside world. Among these presents were several books as well as a poem written by her father part of which she copied out in her diary.

“In spite of everything, I still believe that people are really good at heart.”

3. Anne wrote most of her diary in the form of letters to a person named Kitty

Anne wrote two versions of her diary. The first version was written in the red autograph book she received for her birthday with most of the entries adressed to Kitty.

Some believe Kitty is Anne’s friend, Käthe "Kitty" Egyedi. Others think that Anne borrowed the name from her favorite book series, Joop ter Heul, in which the title character’s best friend was named Kitty.

It’s worth mentioning that early letters were also addressed to Conny, Marianne, Emmy, and Pop.

Anne rewrote her diary in 1944 after hearing a call on the radio for people to save their war-time diaries in order to help document the suffering of the Nazi occupation once war was over.

“You can always, always give something, even if it’s only kindness!”

4. Anne Frank spent a total of two years and 35 days in hiding

During that time, she was unable to see the sky, feel the rain or sun on her skin basically spend any amount of time outdoors.

The residents of the annex were arrested on 4 August 1944. It has been thought that someone called the German Security Police but the identity of this caller has never been confirmed. A new theory suggests that the Nazis may in fact have discovered the annex by accident while investigating reports of fraud and illegal employment.

The residents of the annex were first taken to Westerbork transit camp in the Netherlands, followed by the notorious Auschwitz concentration camp in Poland. At this point the men and women were separated – Anne staying with her mother and sister. A few months later the two girls were taken to the Bergen-Belsen concentration camp in Germany. Both Anne and Margot are believed to have contracted typhus and died around the same time, just a few weeks before the camp was liberated.

The exact date of Anne’s death is not known but it is thought she died in either February or March of 1945. Margot was 19, and Anne only 15.

Otto was the only known surviving resident of the Annex and of the Frank family. He was held at Auschwitz until its liberation in January 1945.

“I don’t think of all the misery but of the beauty that still remains.”

After the arrest of the Annex’s residents, Anne’s diary was saved by Miep Gies, a trusted friend of the Frank family who had helped them during their time in hiding. Gies gave the diary to Otto in July 1945 following confirmation of Anne’s death. Gies later said that if she had known what was inside, she would have destroyed the writings because they incriminated everyone who helped hide the residents of the Annex. Otto Frank finally persuaded her to read it when the book was in its second printing.

Anne didn't just keep a diary. She wrote tales and planned to publish a book about her time in the Secret Annex. Respecting Anne’s wishes, Otto managed to have the diary published with the first edition combining versions A and B in the Netherlands on 25 June 1947 under the title The Secret Annex.

Seventy years later, the diary has been translated into as many as 70 languages and more than 30 million copies have been published.

Even though it tells a very important tale, the diary is often banned and challenged.

There are passages in the diary in which Anne expresses curiosity about her anatomy in a curious and sometimes joking way – a completely normal thing for a girl her age to do – but still upsetting some. Also, a school in Alabama tried to block Anne’s diary from schools in 1983 because it was “a real downer.”

In the end of this article, filled with facts and quotes, we leave you with a beautiful, but a heartbreaking quote from Anne herself. She truly was a writer.

“What a wonderful thought it is that some of the best days of our lives haven’t even happened yet!”