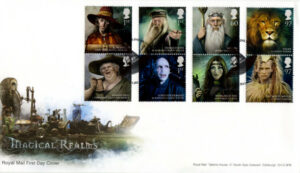 In 2011, exactly 10 years ago, the Royal Mail issued a commemorative set of eight stamps called “Magical Realms”. The stamps star well-known characters such as Dumbledore and Lord Voldemort from Harry Potter, Merlin from Arthurian legend, and Aslan from CS Lewis’ Narnia. Two stamps from that set are portraying characters from the fantasy series “Discworld” by Sir Terry Pratchett – Rincewind and Nanny Ogg. In this article, we will introduce you to these characters, series, and their famous author.

Terry Pratchett is a world-famous British author, most well-known for his Discworld series of fantasy novels. His world called “Discworld” is a flat, round disc supported by four elephants that stand on the back of a giant flying turtle that's swimming through space and has a small fiery sun orbiting it. All this shouldn't be surprising in a universe that was created with less regard for physics, or even common sense, and with more sense of humor than in our “Roundworld”.

In the Year of The Beleaguered Badger (Roundworld 2021.) it has been almost 73 years since the birth of Terry Pratchett on the 28th of April 1948., and six years since he died at home “with his cat sleeping on his bed, surrounded by his family”. in the Year of the Spinning Mouse (Roundworld 2015.) at the age of 66.

He was a very prolific author that produced 41 books placed in his Discworld series and 20 more unrelated to it, 18 graphic novels, 10 collections, 27 short stories, 6 maps, 4 companions, 4 books of the science of Discworld, 7 artbooks, and plenty more miscellany. His books sold in more than 70 million copies worldwide, and they were translated into more than 30 languages. He also held the questionable honor of being Britain's most shoplifted novelist. For his contributions and service to literature, he was knighted in the Year of the Pensive Hare (Roundworld 2009.).

In 2003 while Terry was writing Going Postal, Terry reveled in the opportunity to indulge his boyhood fascination – being a stamp collector as a young man, philately was his great passion. So, it’s no wonder his fictional metropolis of Ankh-Morpork has its own postal service that developed its own stamps, a trend which soon spread through the rest of the Disc.

And we know that where there are stamps, there are stamp collectors too! In Discworld they are known as flatalists, and their hobby as flataly, because the item of their interest is, well – flat. Flatalists exist in our Roundworld too, and since the Year of the Prawn (Roundworld 2004.), they can collect numerous fictional stamps faithfully recreated from their descriptions in the novels, or depicting scenes and characters of some notice. Those stamps are known as “emberella” stamps, where Emberella is the Discworld equivalent of our Cinderella, and “cinderella stamps” are “virtually anything resembling a postage stamp, but not issued for postal purposes by a government postal administration”. Emberella stamps are issued by the Discworld Emporium which is appointed by Sir Terry Pratchett himself as an official branch of the Ankh-Morpork Post Office with an exclusive license to produce stamps from all over the Disc.

Just like the book itself, Discworld Stamps pay homage to the hobby of stamp collecting, and are the product of authors fondness for philately, but phenomenon of emberella stamps deserves its own post. So today we will talk only about real-life, official, Royal Mail issued stamps with Discworld motifs. On the 8th of March 2011. (in Discworld - the Year of the Complicated Monkey) Royal Mail issued a set of eight 1st and 2nd rate stamps called Magical Realms, with two of them picturing Discworld characters.

Designed by So Design Consultants

As we already mentioned, one star is a wizard called Rincewind, the failed student and "the magical equivalent to the number zero":

And on the other a witch named Nanny Ogg, a witch and a matriarch that has been married 3 times and has 15 children:

The six other characters of the collection are Dumbledore and Lord Voldemort, Merlin and Morgan LeFay, Aslan and the White Witch.

Unlike these Roundworld stamps, which are certainly beautiful and unique, Emberella stamps are much more edwardian and victorian in their looks, evoking the aesthetics of the early 20th century. They continue to be printed and new releases come to life even after the author’s passing, ensuring that the fandom that came to life in the Century of the Fruitbat is continuing strong into the Century of the Anchovy, keeping the spirit and legacy of Sir Terry Pratchett well and alive.

Let's stop here with one wise quote Terry left us: "Pets are always a help in times of stress. And in times of starvation, too, of course."