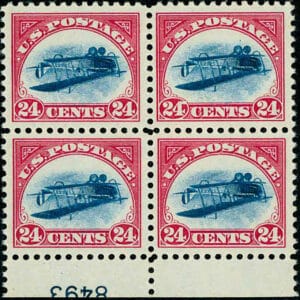 “Regular” Jenny (Inverted Jenny’s good sister:) by design is just one usual stamp from that period. While, it’s a pretty one with several details, it’s not so special when we talk about the number of stamps issued and their value. There is a number of them out there in the market and for a few hundreds of dollars, you can easily get yourself one of them or even a block.

It was planned to be used starting from 1918/05/15 to commemorate but also to pay for the cost of the first airmail service. This airmail service had been established between Washington, Philadelphia, and New York.

Jenny was the USA airmail 24¢ stamp issued on 1918/05/10. It was one of the two-color postage stamps. Printing stamps in one color was cheaper, so two-color engraving/printing had been reserved for more valuable stamps. The whole idea was to print one color on one machine and then insert the paper and print the motif on the next machine.

Note: The motif on the stamp is U.S. Army Curtiss JN-4 “Jenny” biplane and that is where the name of the stamp originates from.

You could insert paper as it should be or the other way around. If you’ve inserted paper in the press in the wrong manner, the result would be an error (one of the common error issues from that time). And that’s how Inverted Jenny was born.

Inverted Jenny is just like „Regular“ Jenny, except the fact it's inverted and several thousand times more valuable. A total of 7 sheets with 100 stamps each were printed. 6 sheets were withdrawn and destroyed by USPS leaving only 100 of these in circulation. And 1 collector purchased them all.

This is the short history of how Inverted Jenny went to market:

Take a closer look at your collection. Maybe you're a multi-millionaire and you don't even know that.