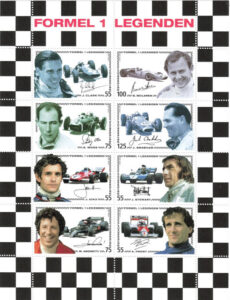 Ayrton Senna and Alain Prost are among few greatest drivers that ever competed in Formula 1. The only thing that was better than each of them alone is that they spent a few years racing against each other. Today, we’ll talk about the two of them and Formula 1, and also take a look at their stamps.

Formula 1 (Formula 1, F1) is the highest-class racing competition started way back in 1950. It would be pointless to try to stick its’ history in this article, so I won’t even try that. It’s important that we have constructors’ competition as well as drivers’ competition. While machine and design have a significant impact, the driver is the one providing the difference when two machines have similar performance. Two such drivers were Alain Prost and Ayrton Senna.

Martin Jacques: "In Formula One, the car can make a difference in a way that a driver cannot. Whereas Michael Schumacher and Ayrton Senna spent their early seasons in second-rate machinery, Hamilton walked into the equal best car on the grid. His first season none the less has, by any standards, been extraordinary."

Sebastian Vettel: "After 10 weeks away from Formula One, when they started the engine here at Valencia and everything was vibrating, I found myself sitting in the RB7 and smiling."

Tamara Ecclestone: "Formula One has been the backdrop of my life."

Bernie Ecclestone: "They say Formula One is a market which it can't be, obviously. Our market is independent, it's a sport."

The 50th Anniversary of the Birth of Ayrton Senna

Ayrton was where he was because he was eager to win and to take risks in order to achieve it.

"You will never know the feeling of a driver when winning a race. The helmet hides feelings that cannot be understood."

And not only did he take the risk but he enjoyed the process along the way.

"Racing, competing, it's in my blood. It's part of me, it's part of my life; I have been doing it all my life and it stands out above everything else."

"The danger sensation is exciting. The challenge is to find new dangers."

"Fear is exciting for me."

"I don't know driving in another way which isn't risky. Each one has to improve himself. Each driver has its limit. My limit is a little bit further than other's."

"I continuously go further and further learning about my own limitations, my body limitation, psychological limitations. It's a way of life for me."

Unfortunately, all of that led to his tragic end. It’s always hard to find the balance between being worlds’ #1 and not hurting yourself along the way. While the name of the winner shall be written down in history, nobody will remember thousands of those who gave up everything for success but never accomplished it.

"These things bring you to reality as to how fragile you are; at the same moment, you are doing something that nobody else is able to do. The same moment that you are seen as the best, the fastest and somebody that cannot be touched, you are enormously fragile."

"It's going to be a season with lots of accidents, and I'll risk saying that we'll be lucky if something really serious doesn't happen."

"Because in a split second, it's gone."

The 20th Anniversary of the Death of Ayrton Senna

"A German team could be quite good. But maybe they are a little bit too convinced that they are the best."

"You want to have fun but you also want to work well. Sometimes I was quite happy at Ferrari because we would have fun, but then they could not stop having fun and go back to the real work."

"I have had some problems because the French don't like people to have success, they don't like the number one."

"When you win a race like this the feeling is very, very good."

Fernando Alonso (Two-time F1 World Champion): "I remember I went to school and on my book, I didn’t have pictures of girls, but I had Ayrton there, and the same in my room. I had a big poster of Ayrton and even my first go-karts were in the colours of Ayrton’s McLaren because my father also liked him."

Lewis Hamilton (Five-time F1 World Champion):"He is an incredible legend. You can still learn things from how he approached racing and how he drove. You like to think that one day you may be recognized as someone that was able to drive similarly to him."

Bernie Ecclestone (Formula 1 Boss): "The trouble with asking for good memories of Ayrton is that I do not have any bad ones. Perhaps my very vivid memories are of his strong opinion, and most of the time he was right."