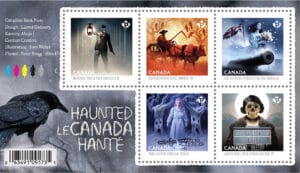 In the previous article, we got moderately scared. Now it’s time to get properly scared with spooky legends from Canada presented on Halloween-related stamps.

Canada Post does really great business all the way since 1867. There were some classic issues along the way, but there are some that are pretty thematic.

Personally, I have nothing against the heads of the presidents on stamps, but they usually don’t present much more history than the fact somebody was a president. And the design of the stamp is also pretty much as expected.

So, my personal preferences are sheets like these ones we’ll see today, those ones that have much to say.

Everything started in 2014. On June 13, this 5-stamps sheet was issued. In fact, the booklet of 10, the uncut press sheet of 8 souvenir sheets and prepaid postcards (1 of each design) were also issued.

Each stamp is related to one of the ghost stories collected from all over the Canada. The denomination of each stamp is “P”, meaning that stamps are permanent, similar to the ST and FOREVER stamps in the UK and USA. You buy them today at the current price and you’ll be able to use them anytime in the future to send mails weighing up to 30g anywhere in the Canada. You can also combine them with other stamps to send mail even internationally.

Five stories presented on these stamps are (starting from left to right, upper row first, then lower row):

In 2015, Canada Post continued this series with a new sheet and 5 new stamps introducing five new “old legends”. The new sheet was issued on September 14, along with the booklet pane of 10, the uncut press sheet of 8 souvenir sheets and prepaid postcards (1 of each design).

Five new “old” stories presented on these stamps are (starting from left to right, upper row first, then lower row):

Last sheet (so far) from the Haunted-series happened on September 8, 2016. Five new scary stories from all over Canada are once more used as the main motif for the five stamps on the sheet. On that date, the booklet pane of 10, the souvenir sheet of 5, the uncut press sheet of 8 souvenir sheets and prepaid postcards (5 designs) were issued.

New stories from 2016 are (starting from left to right, upper row first, then lower row):

I hope that today you got at least a little scared or if nothing more, informed about the myths you haven’t heard so far. If nothing more, I hope you at least got an idea for your costume. Have fun and be good!