History and Philately: Christmas Truce of 1914 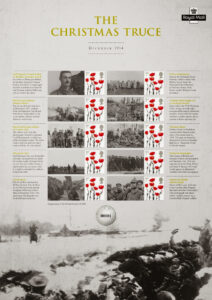 World War I, often abbreviated as WW1, and contemporaneously known as the Great War or "the war to end all wars" was a global war originating in Europe. It lasted from 28 July 1914 to 11 November 1918 and led to the mobilization of over 70 million military personnel, out of which 60 million were Europeans, making it one of the largest wars in history. It is also one of the deadliest conflicts in history, with a horrific estimate of 9 million deaths in combat, 13 million civilian deaths as a direct result of the war, and another 17–100 million deaths worldwide due to resulting genocides and the famous 1918 Spanish flu pandemic.

As with almost every other war, there were many protests. The opposition to World War I included socialist, anarchist, syndicalist, and Marxist groups on the left, as well as Christian pacifists, Canadian and Irish nationalists, women's groups, intellectuals, and rural folk. But this article will not cover this. This article is in the short memory of the people who opposed mid combat, shared the faith and a will to live, and decided not to fight, at least for Christmas. Let them be remembered.

How it all started?

Most of us know that before WWI, there were unresolved political and economic issues among the major political powers in Europe, and the world only waited for a spark to start the fire. And is there a better place to start the fire than in the ever so fiery Balkans, mainly Bosnia and Herzegovina!?

The formal start of WWI was the killing of Archduke Franz Ferdinand and his wife Sophie in Sarajevo on June 28, 1914. They were shot by Gavrilo Princip, a member of the organization Young Bosnia and related to Serbian organization Black Hand, who shared a belief that Austro-Hungarian rule over Bosnia should finish and that Yugoslavia should be unified.

After that Austro-Hungary declared a war on Serbia. Other superpowers of that time (Germany, Russia, France, United Kingdom, Japan, the Ottoman Empire, Italy, United States) joined the party soon and so it started the most horrifying war the World had seen so far.

How did it end?

The repercussions of WWI were great. There were enormous territorial changes, the most important were changes in sizes of colonial empires. Some countries completely ceased to exist like Austro-Hungary and the Ottoman Empire, with new ones emerging. The October Revolution in 1917 led to the establishment of the USSR and spreading the communist idea.

And maybe the most important is a horrific estimate of 9 million deaths in combat, 13 million civilian deaths as a direct result of the war, and another 17–100 million deaths worldwide due to resulting genocides and the famous 1918 Spanish flu pandemic.

All of that was the seed that led to the next major conflict, WWII.

Isle of Man Post Office collaborated with the German Post Office to produce a set of stamps to mark the centenary of the Christmas Day truce in World War One. A percentage of sales went towards the Royal British Legion, which provides care and support to serving members of the Armed Forces, veterans, and their families.

But what happened on Christmas 1914?

Most of WWI was trench warfare with little or no progress at all. You can easily imagine cold, muddy, and moist trenches filled with regular Joe soldiers who spent all previous Christmases home with their families. Instead of hope, joy, and homemade food this time around they had bullets, grenades, and bombs as their company. Add to that the unreasonable and ill-prepared charges towards enemy lines and deaths in no man’s land and Christmas could look like Hell.

On Christmas Eve 1914 (December 24, Roman calendar), along the Western Front, a series of unofficial ceasefires took place. It all started around the Ypres, Belgium. Germans decorated their trenches with Christmas trees and candles, sang Christmas carols, and soon the other side also joined in singing their songs.

Soon, both sides decided they would stop fighting at least for one day. They met in no man’s land, cleared it from dead bodies, exchanged gifts, played football (the only result recorded was a 3-2 victory by the Germans, quoted in soldiers' letters from both sides), shared their food and cigarettes. It all lasted for a few hours to a few days until ideology stopped it and the war could continue as planned.

This occasion was also used to repair their trenches and even opposed sides helped each other in doing so. All of them were aware that they’ll continue living in these trenches and that this is the opportunity to make their lives at least somewhat better.

This event serves as a candle in the night. We can still hope that people would rather choose to love each other and share their joy than to shoot at each other.

I encourage you to watch Joyeux Noël, a 2005 epic war drama filmed in the coproduction of Belgium, France, Germany, Romania, and the United Kingdom, depicting events from 1914.

We wish you all Merry Christmas and a Happy New Year. Always remember to be nice to each other because it’s the only thing that really counts – everyone you know is fighting a battle you know nothing about. Don’t let ideologies and politics ruin that.