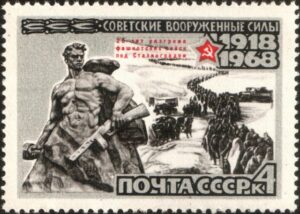 Battle of Stalingrad (23 August 1942 – 2 February 1943) was the most important battle of World War II. It stopped the Nazi advance for the first time and truly turned the tide of the war on the Eastern Front.

After scoring massive success on the Eastern Front (and also on the Western Front, Atlantic, and in Africa), Hitler felt pretty confident that the USSR is close to final defeat. German attacks in 1942, in southern Russia, had 2 main directions, one to the south Caucasus and oil fields and the second one towards Stalingrad. Stalingrad was a symbol for the USSR, not only because of its’ name but because of its’ heavy industry and importance in rail and river transport. Of course, taking a city, with Stalin’s name would be a decisive blow to the morale of the Red Army.

Charity for the Croatian Legion

Sailor at the Sea of Azov, Pilot at Sevastapol

Legionnaires at Stalingrad, Legionnaire in the Don region

Nazi Germany had two armies in charge of this battle – the 6th Army under Friedrich Paulus and elements of the 4th Panzer Army under Hermann Hoth. A number of units from occupied and puppet states were also involved, most notably from Italy, Romania, Hungary, and the Independent State of Croatia, bringing the total number to more than 1 million at its’ peak.

Until Stalingrad Red Army suffered one defeat after another with mostly retreating and trying to establish the defense line. There were smaller and larger pockets of resistance deep inside the occupied territory as well as partisans operating in occupied territories using guerrilla tactics. At the start of the battle, the Germans made the biggest mistake of bombing the town into ruins. That proved to become curtail for the defense of the city. The ruins were a perfect terrain to eliminate the usefulness of the Luftwaffe and German armor. The Soviet plan was to hold the city at any cost with just enough resources while bringing reinforcements for a counteroffensive.

While Order No. 277 (“Ни шагу назад! “ = “Not a step back!”) had been issued around a month ago (on July 28, 1942), Stalingrad was the place where it proved crucial. While it was a motivational message, in reality, you should often point guns to keep soldiers from feeling that battlefield. Still, it was nothing specific for this battle, the same thing will happen to Germans later. Losing the war is not a nice position to be in. Still, that order helped in the stabilization of the front and cleared the way for a counteroffensive. And it also helped Soviet soldiers to feel better, no matter how weird that might sound these days. The most notable commander on the Soviet side was Georgy Zhukov.

The Battle of Stalingrad

You can’t describe this battle in a few words. This would require books, movies, and documentaries – and there is plenty of it. So, I’ll mention only some of the most important facts here.

Pavlov’s house – was a four-story building Red Army troops managed to retake from Germans and hold, being under siege, for 60 days, until the siege was lifted. It was placed in the center of Stalingrad and was a real pain in the ass for Germans. It got its name from Sergeant Yakov Pavlov, a commander of the platoon that held the building.

The Volgograd Tractor Plant – was the place where heavy fighting took place, but T-34 tanks were produced during the battle. Unfinished tanks that couldn’t move, were placed inside the factory with their guns firing through the holes. There were cases when workers would finish working on the tank and after that take their position in that same tank and drive themselves into battle.

Railway station – Fighting around Railway Station No.1. were extremely intense with the station changing sides 14 times during 6 hours of one day alone.

Snipers – Turing a city into ruins made it a perfect place for sniper warfare. Red Army used snipers with great effect and the most notable of them was Vasily Zaytsev who killed 225 German soldiers and officers, including 11 snipers, in more than 1 month. He was reburied Mamayev Hill in Volgograd in 2006 and very close to his famous words "For us, there was no land beyond the Volga". There is also a film from 2001 (“Enemy at the Gates”) with Jude Law as Vasily.

After the Soviet counterattack (Operation Uranus), the German 6th Army was trapped in Stalingrad. All plans to relieve the siege were unsuccessful and the Army, commanded by Friedrich Paulus, finally surrendered on February 2, 1943. Paulus became the first German Generalfeldmarschall to surrender in history. This was a decisive blow to German morale and the myth of German invincibility was finally broken. Paulus became very critical of the Nazi regime and lived and worked in DDR until he died in 1957.

Losses on both sides were extremely high. While the Red Army could recover from these losses that were not the case for the Wehrmacht. Nazi Germany lost the complete army and a lot of elite units. Many units were transferred from West to East leaving West exposed with inexperienced or older soldiers to confront Allied actions there.

Maybe the greatest reason for the Nazi defeat was the fact that Hitler didn’t trust his generals and saw himself as the one who should make decisions. That resulted in many poor decisions, like not allowing Paulus to retreat from Stalingrad, many delays, and plan changes. Unlike him, Stalin changed his mind and left the war to his generals.