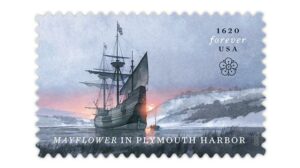 Thanksgiving celebration in the USA started almost four centuries ago and with many changes continues until today is one of the most important holidays these days. Today we’ll take a short look at the history, of course, using stamps along the way.

Pilgrim leadership had to leave England because of their belief and they settled in Holland at first. Being afraid of losing their English identity, they decided to establish a new colony in North America and that’s how all of it started.

...had 102 passengers and around 30 crew members originally. Some passengers traveled with their whole families while others traveled alone. Two women were pregnant during the travel, Elizabeth Hopkins (son Oceanus was born while at sea) and Susanna White (son Peregrine was the first European born child in New England).

The passengers spent the first winter onboard the Mayflower. Conditions were very harsh and in combination with the outbreak of diseases the result was that only half of the passengers and crew survived. The Mayflower Compact was the document signed on Mayflower on November 11, 1620.  It defined the set of rules that were important that the colony could survive and function normally.

There are few USA stamps issued to commemorate these events, but maybe to best are the series from 1920 and the 1970 single stamp.

Landing of the Pilgrims

Signing of the Compact

After the landing Pilgrims established the settlement (Plymouth) but still spent the winter mostly on the Mayflower. They had contact with Native Americans and there were small skirmishes and steals and later Native Americans (Wampanoag/ Massasoit) helped the Pilgrims survive the winter providing them with supplies. It’s very important to notice that Patuxet Native American Squanto/Tisquantum played an important role serving as an interpreter between Pilgrims and Wampanoag Chief Massasoit.

Native Americans provided Pilgrims with the seeds of the new world and the knowledge of how to grow them.

Similar celebrations, even with the same name, are held in a few more countries and some notable are Canada, Grenada, Liberian, and Saint Lucia. Many other countries also have a harvest-related celebration just named differently, e.g. UK equivalent is called Harvest Day.

Let’s go back to the USA. Some of the first things you’ll think of when you hear Thanksgiving are dishes – turkey, stuffing, and pies.

The main reason turkey is on the Thanksgiving tables is the fact that wild turkeys are native to North America and thus finished on the tables of Pilgrims also.

The other very important “thing” related to Thanksgiving are parades. There are many parades, but most of them include marching bands and giant balloons.

Black Friday is the day after Thanksgiving. It’s the start of the Christmas shopping season since 1952. I guess that most of us know that on Black Friday you’ll be offered significant discounts and these days that will happen not only in the USA but also Worldwide.

This one started relatively recently, in 2005. Cyber Monday is the first Monday after Thanksgiving and as you could guess from its’ name, online retailers will offer a significant discount, similarly to Black Friday.

I hope that you reminded yourself of some important historical events that are behind Thanksgiving. It’s not all about shopping, so shop wisely and according to your financial limitations. As one meme says: “Better pay your electric bills first, or next Friday will be black Friday too.”