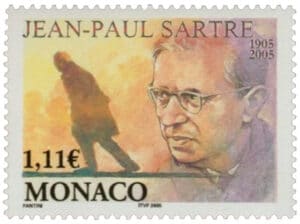 Jean-Paul Charles Aymard Sartre was born on 21 June 1905 in Paris, France. He was one of the most important figures in French philosophy and Marxism in the 20th century.

We’ll remind of Jean-Paul with five well-known and some less-known facts related to his life as well listen to his words.

…Barionà, fils du tonnerre (Bariona, or the Son of Thunder), on the occasion of the Christmas feast, while being a POW in Stalag XII-D, during WWII. He was drafted in the French military in 1939 as a meteorologist and was captured a year later. In 1941 he was released from captivity due to his bad health. The play was performed on December 24, 1940 at Stalag XII in Trier. It takes place in Judea at the time of the Roman occupation.

“Fascism is not defined by the number of its victims, but by the way it kills them.”

“I do not believe in God; his existence has been disproved by Science. But in the concentration camp, I learned to believe in men.”

“Freedom is what you do with what's been done to you.”

Part of the “Famous Writers” series

…he was a part of the French resistance and was the cofounder of the group Socialisme et Liberté together with Simone de Beauvoir, Dominique Desanti, Jean-Toussaint Desanti, Maurice Merleau-Ponty, and Jean Kanapa. He still stayed active also as a writer during the whole war. In 1944, his article, in which he paid tribute to those fighting against the occupation, had been first published in the United States: “Never were we freer than under the German occupation. We had lost all our rights, and first of all our right to speak. They insulted us to our faces. ... They deported us en masse. ... And because of all this we were free.And that is why the Resistance was a true democracy; for the soldier, as for his superior, the same danger, the same loneliness, the same responsibility, the same absolute freedom within the discipline.”

"When rich people fight wars with one another, poor people are the ones to die."

“If a victory is told in detail, one can no longer distinguish it from a defeat.”

"One always dies too soon or too late. And yet, life is there, finished: the line is drawn, and it must all be added up. You are nothing other than your life."

St Vincent and the Grenadines

…existentialist and one of the most famous atheists of the 20th century. As previously mentioned, he was very close to Simone de Beauvoir, which we can also see from one of his letters to her: “I am giving myself short shrift in my little black notebook. Whoever reads it after my death—for you will publish it only posthumously—will think I was a dreadful character, unless you accompany it with explanatory annotations of a kindly sort.”

“Hell is other people.”

“That God does not exist, I cannot deny, That my whole being cries out for God I cannot forget.”

The 100th Anniversary of the Establishment of Nobel Prize Fund

…awared Nobel Prize in Literature, which he refused. The reason for that was the fact he also refused other prizes (e.g. Legion of Honor). Using his words: “a writer should not allow himself to be turned into an institution”. He also sent a letter to the Nobel Institute but the, asking them to remove from the list of nominees, but the letter went unread.

“If literature isn't everything, it's not worth a single hour of someone's trouble.”

“All that I know about my life, it seems, I have learned in books.”

“The best work is not what is most difficult for you; it is what you do best.”

"Every age has its own poetry; in every age, the circumstances of history choose a nation, a race, a class to take up the torch by creating situations that can be expressed or transcended only through poetry."

“A lost battle is a battle one thinks one has lost.”

“There is only one day left, always starting over: it is given to us at dawn and taken away from us at dusk.”