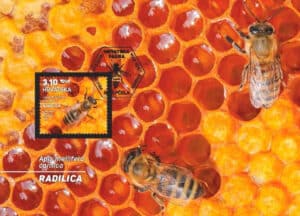 We’re all aware that bees are not only cute, but also extremely important for the life on the Earth. Today we’ll go through 8 interesting bee facts and also see some really interesting bee-related stamps.

Why Are Bees Important?

“Almost 90% of wild plants and 75% of leading global crops depend on animal pollination. One out of every three mouthfuls of our food depends on pollinators such as bees. Crops that depend on pollination are five times more valuable than those that do not.” (WWF) 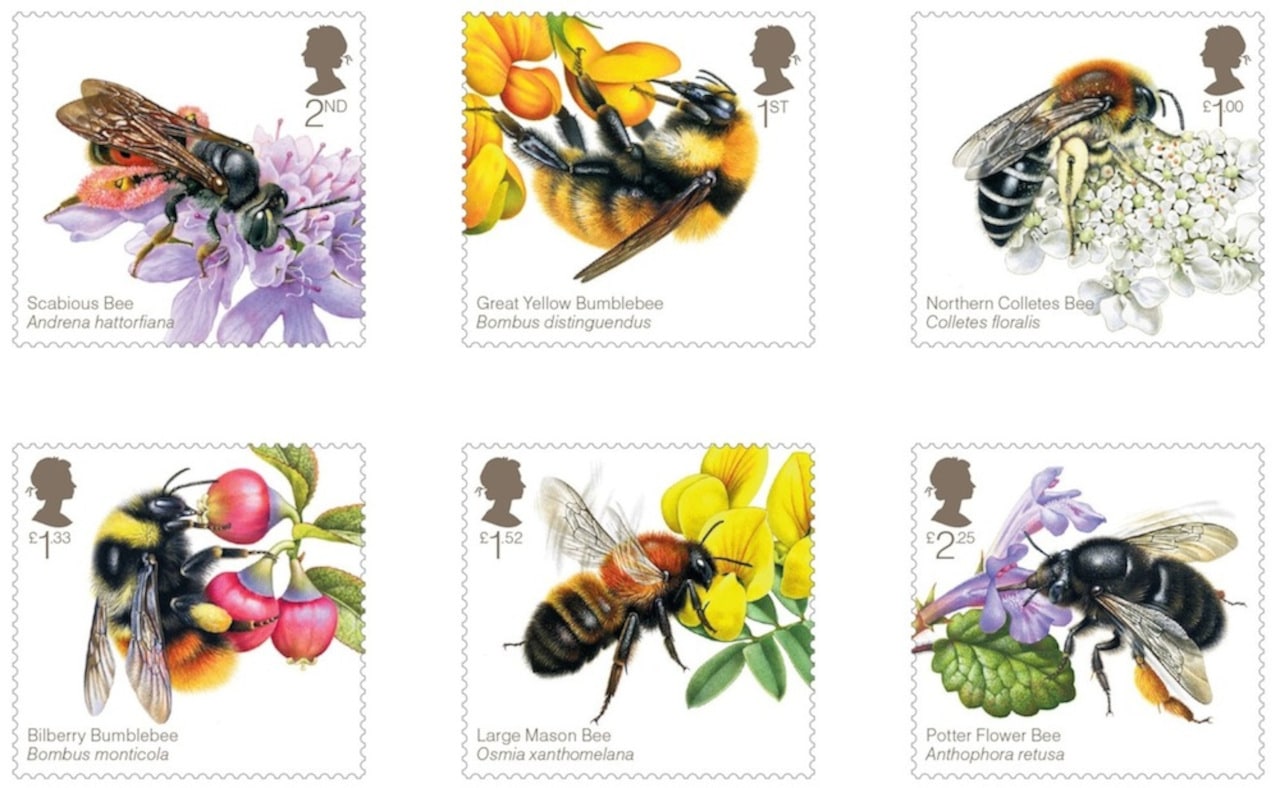 We could also say it simpler: Honey bees fly from flower to flower in their search for nectar and pollen. Nectar is used as a source of energy to do their work, and also a main source of their food. Pollen is used to feed baby bees (larva) in the hive. While performing their routine work, bees also transfer pollen between the male and female parts, allowing plants to grow seeds and fruit. This enables a number of plants to grow and therefore creates the base for biodiversity on our planet.

Or even shorter – without bees, we would be in a serious trouble.

There are around 2 trillion bees worldwide. They belong to 20000 bee species and are divided into 7 families (Apidae, Megachilidae, Halictidae, Andrenidae, Colletidae, Melittidae, and Stenotritidae). The most common bee species worldwide is Western honey bee (European honey bee) famous for its honey production and pollination. I guess that’s the picture of bee we have in mind when we imagine a bee. 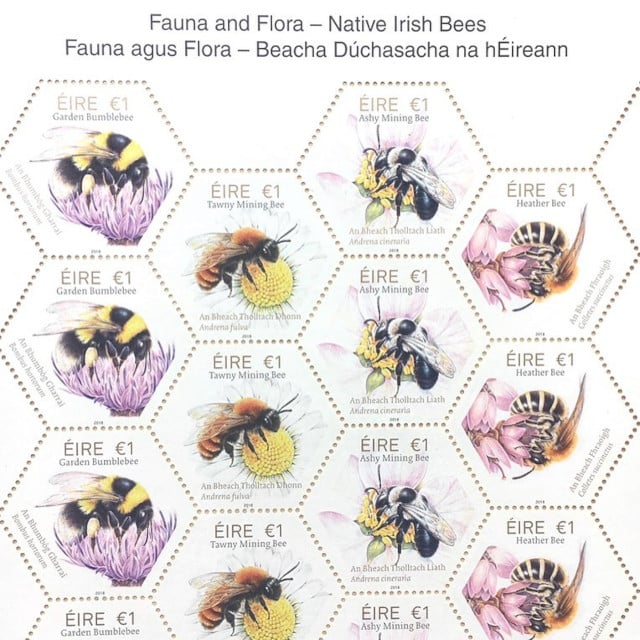 With that said, there are bees that produce honey, and ones that don’t, such as digger bees, carpenter bees, and oil-collectors.

Also, when we think of bees, we think of a hive. Still, there are solitary bees who like to live on their own, and don't have a queen, or live in hives. I would say that Maya the Bee is an example of solitary bee.

Where Do Bees Live?

The usual picture we have in mind when talking about bee “home” is a hive, that could be above or underground. Such hive has one queen and a large number of workers and drones. Hive is built out of hexagons. The reason for this is that a hexagon is the preferred shape that leaves no empty space between two adjacent hexagons. This helps a lot with space organization in the hive, but also helps bee regulate temperature in warm and cold periods. Needless to say, that bees are extremely skilled builders and that they don’t have any problem building such a hive. 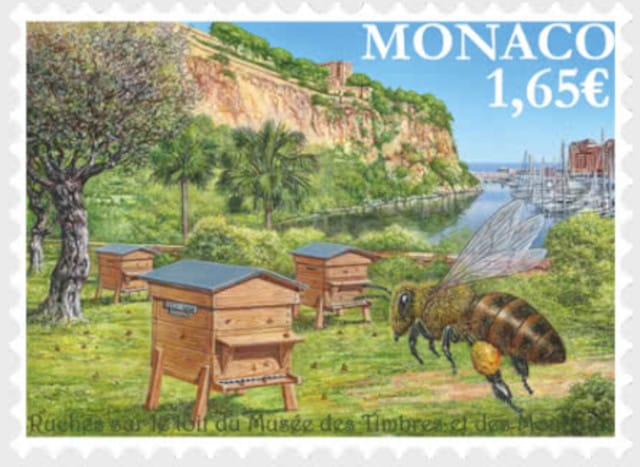 Besides this standard picture we’re used to, bees could be found in many other places too. “Bees can be found in so many locations, some surprising. These include marshes, shingle, sand dunes, soft cliffs, heathlands, wetlands, chalk grasslands, quarries, gravel pits, sea walls and even post-industrial land.” (WWF)

Every hive has exactly one queen bee. This bee is actually not a ruler, but rather she plays her role. She leaves hive only for 1-2 days to mate up to 30 with drones. After that, she returns to the hive and never mate again. Her role is to lay down eggs (around 2000 to 2500 eggs per day) to create new workers and drones. 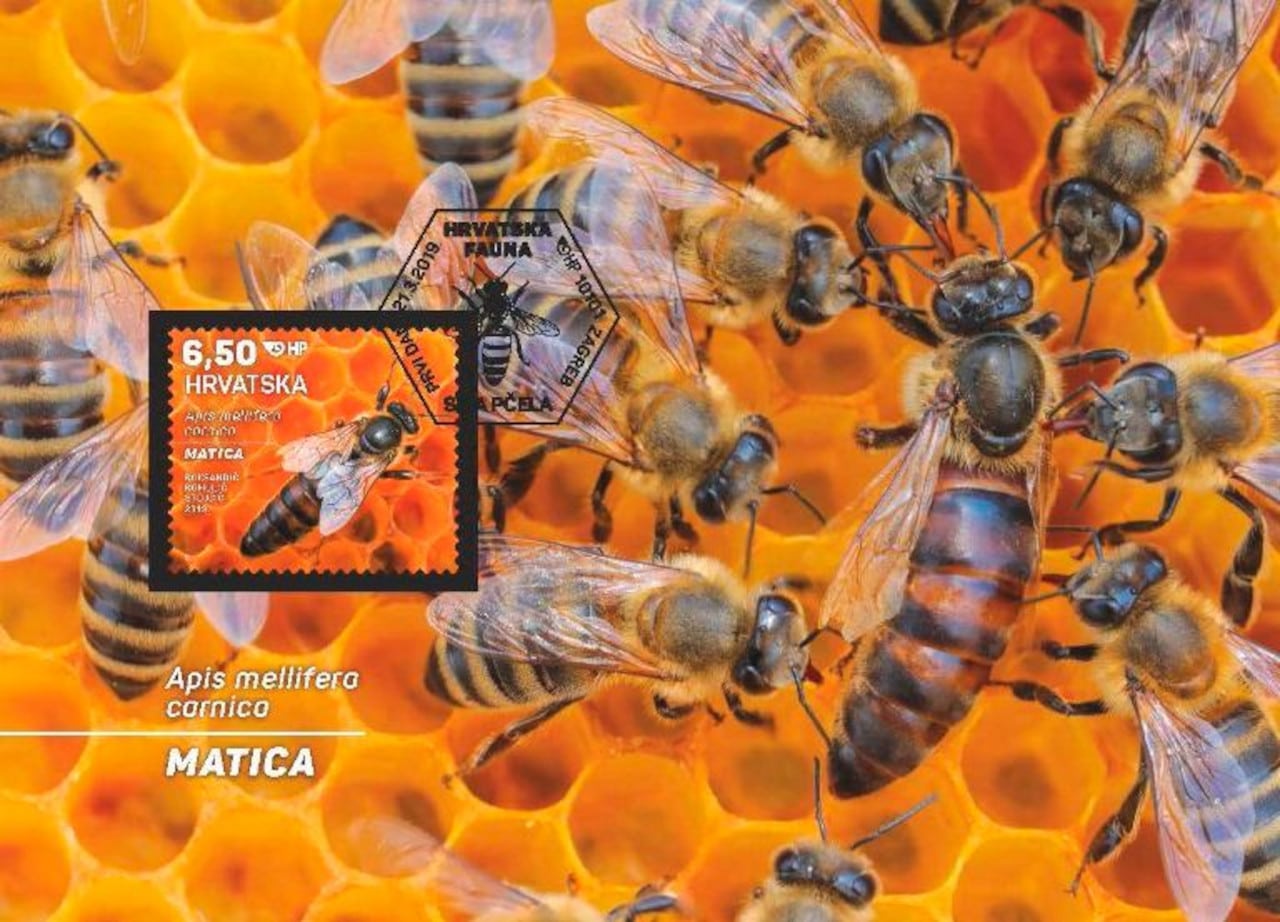 In order to have time for her duties, other bees from the hive take care of the queen bee, cleaning and feeding her whole day. Unlike others, the queen bee doesn’t eat much honey, but rather royal jelly.

The queen bee usually lives around 1-2 years. When the queen bee is not fertile anymore, other bees kill her and create a new queen. They feed few fertilized eggs with royal jelly. "Royal jelly is used to feed future queens, as it triggers the development of ovaries. Bee pollen and “bee bread” are not produced by bees but are important sources of protein for growing bees." (Peta) If/when several queens develop, the first one kills others in order to become the one and only queen.

As their title says, workers do almost all the work around the hive. "Worker bees are female but are not capable of reproducing. They do all the work in the hive, and they control most of what goes on inside. Their jobs include housekeeping, feeding the queen, drones and larvae, collecting the pollen and nectar, and making the wax. Because they work so hard, during the busy season worker bees live for only about six weeks." (techno-science.ca) 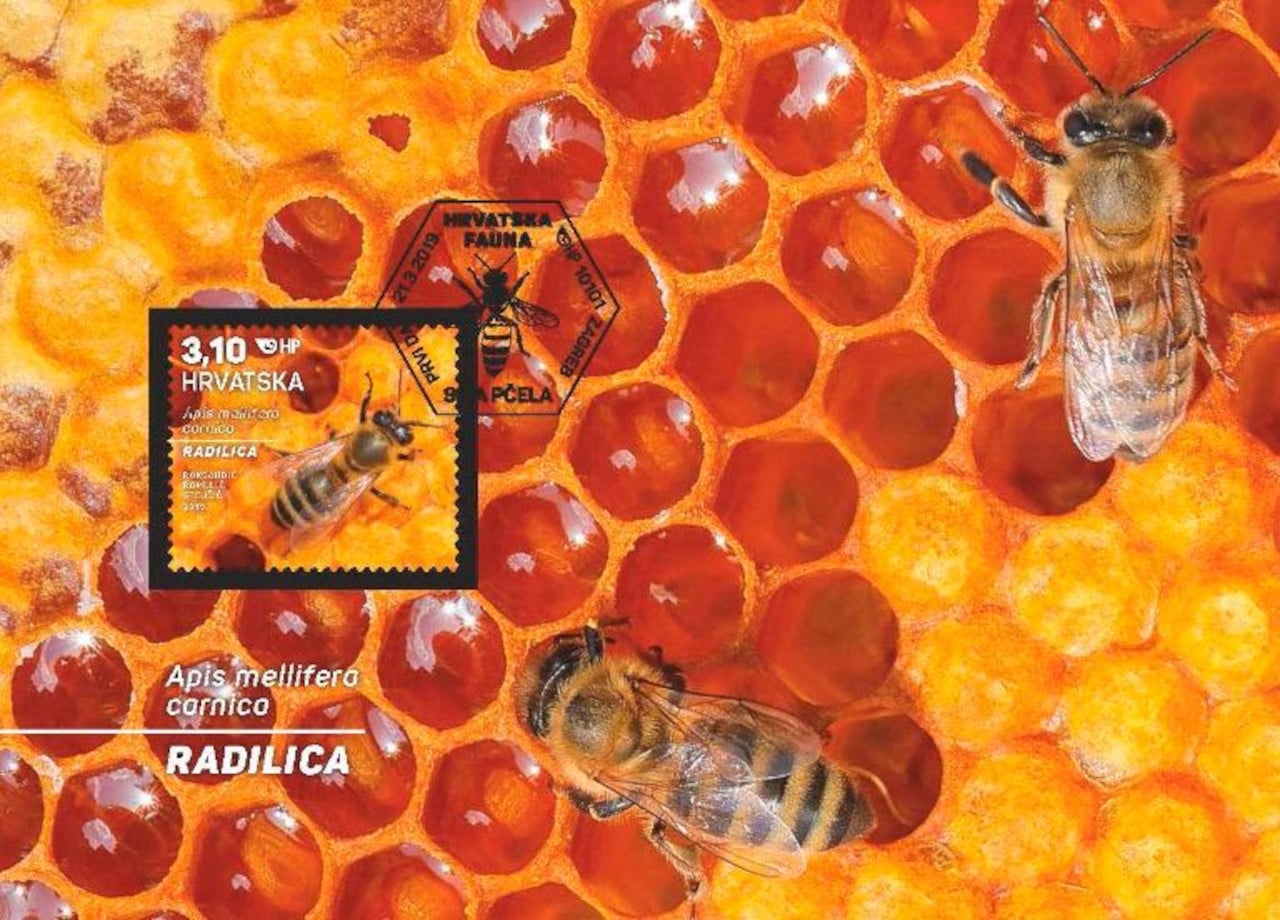 On the other hand, drone bees live pretty good life, until they get kicked out from the hive. 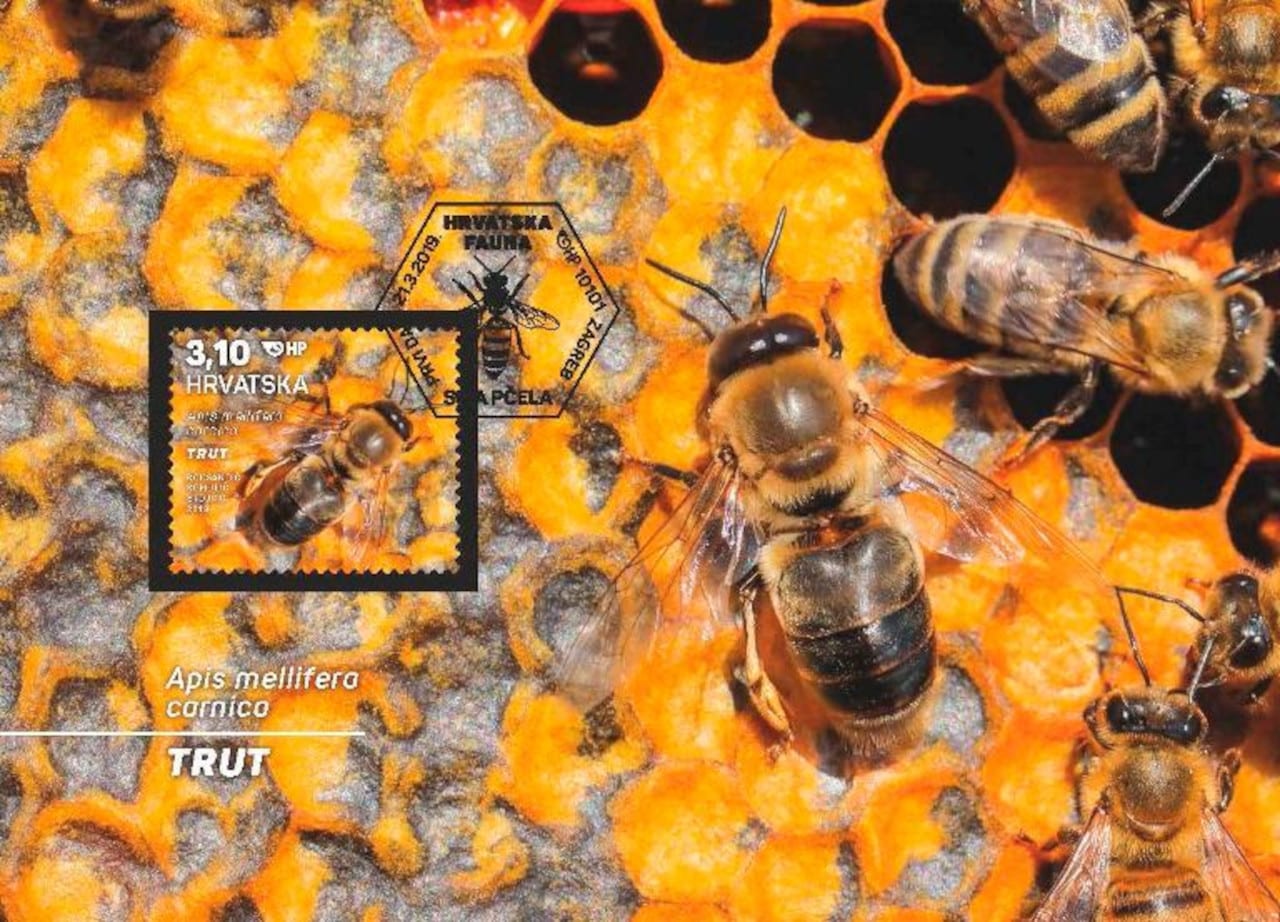 "Drones are male bees and their sole purpose is to mate with the queen: they don't work, don't make honey and can't sting. Since a queen only needs to mate once, most of the drones won't even get the chance to fulfil their role. But worker bees keep them around, just in case a new queen needs mating.

Drones usually live for about eight weeks and, in that time, have all their needs met by worker bees. In the fall, the worker bees kick the drones out of the hive because keeping them through the winter demands too much work and food." (techno-science.ca)

Today we went through some well-known facts about bees, but I guess we also learned something new. I definitely know I did. Still, these are only first 5 facts about bees. In the next article, we’ll cover the remaining 5 interesting bee facts. And, of course, see more bee-related stamps.

« The Red Cross on Stamps: A Tale of Henry Dunant and Clara Barton
Rarest Stamps: Most Valuable Stamps of Israel »