Nature and Philately: Dinosaurs of Europe 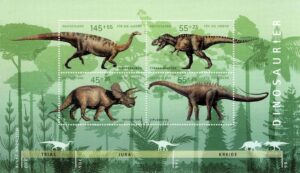 Dinosaurs – from the latin word Dinosaurium meaning "terrible lizards" – are a group of reptiles. They were the dominant land animals of the Mesozoic era and over 500 different genera of dinosaurs are known.

People have been finding dinosaur fossils for many, probably thousands of years. Many believe that these findings gave rise to the ancient Greek and Roman ogre and griffin legends. There are also references to "dragon" bones found in China over 2,000 years ago – which are now believed to be dinosaur fossils. Interestingly, the Chinese also named a very recent finding Wulong bohaiensis, which translates to "a dancing dragon". With many fossil locations across the USA and progress in finding “lost” fossils of Africa, it is clear dinosaurs have been living on every continent and it comes as no surprise there are still frequent new discoveries.

Europe is relatively rich in fossils from the Jurassic – Cretaceous period, and much of what is known about European dinosaurs dates from this time. The absence of dinosaurs from other periods is almost certainly not because Europe had few types of the dinosaur but because they were simply not found yet.

Most European fossils have been found in England and Germany so it is no wonder these countries are the main birthplace of modern paleontology. These countries often commemorate their findings in many ways – including stamps and fun dino-themed destinations. Today, we present you with both, plus a few extra special issues!

As beforementioned, people have been finding “ogre” and “dragon” bones for centuries, so it is no surprise that when a huge thigh bone was found in England by Reverend Plot in the 17th century, it was thought that the bone belonged to a "giant”.

After that, it took 2 centuries for the first dinosaur to be described scientifically, and it was Megalosaurus. He was not the first one to be discovered (it was Iguanodon), but he was the first one to be named and by William Buckland – a British fossil hunter and clergyman.

The first dinosaur models (life-size and made of concrete) were also made in the United Kingdom in the 19th century by Benjamin Waterhouse Hawkins. It is very usual to see these models in history museums or period parks these days, but it is interesting to know that the first dinosaur model used for amusement was a life-size model of an Iguanodon made to house a dinner party for scientists at a major exhibition! The invitations to the party were sent on fake pterodactyl wings and the party took place in 19th century London. Those people really know to party!

Today, The United Kingdom commemorated its rich dino history in many ways – including museums and other sights. We cannot omit to mention the very famous National History Museum which is home to one of the most extensive dinosaur collections in the world including the famous Diplodocus skeleton called “Dippy”.

Then, there is a long Jurassic Coast between East Devon and East Dorset, which offers cliffs and coastline documenting nearly 200 million years of geological history. Many fossils can be seen and the route can be completed by a visit to The Dinosaur Museum in Dorchester.

Finally, The Isle of Wight is a treasure trove of dinosaur fossils and footprints and visitors can find many dinosaurs remains along Compton Beach. Located on the other side of the island in Sandown, Dinosaur Isle boasts a geological collection which has grown since 1819.

It will come as no surprise that the Royal Mail also issued a couple of commemorative sheets, the last one in 2013. This collection was designed to celebrate the 200-year history of paleontology in Britain and the discovery of a multitude of dinosaur remains in Britain by British paleontologists. It starred 10 animals, 6 of which were dinosaurs and the rest were flying and marine reptiles.

Germany, the home of some of the world's most eminent paleontologists, has contributed immeasurably to our knowledge of prehistoric life thanks to its well-preserved fossil beds which yielded a rich variety of theropods, pterosaurs, and feathered "dino-birds”.

Talking of “dino – birds” and especially interesting, only 12 Archaeopteryx specimens in the world have been recovered, and all from Germany's Solnhofen beds which can be visited. Often (and incorrectly) called the first true bird, Archaeopteryx was much more complicated than that. It was a small, feathered "dino-bird" that may or may not have been capable of flight.

The found specimens are some of the world's most beautiful and coveted fossils, to the extent that one or two have disappeared, under mysterious circumstances, into the hands of private collectors.

When talking dino we also must mention the The Naturkundemuseum in Berlin, home to the largest mounted dinosaur in the world: the Brachiosaurus in the Dinosaur Hall. This model stands 12 meters tall and 24 meters long dwarfing the Diplodocus skeleton next to it.

And when talking stamps, in 2008 the German Post AG has released the stamp series "For the Youth 2008" in cooperation with "For the Youth" (Für die Jugend) organization. The sheet we are interested in today consists of 4 stamps with dinosaur motifs.

Belgium is famous worldwide for its chocolate and beer and is not exactly teeming with dinosaurs. Apart from their species of Iguanodon, there isn't a lot to write home about. Still, thanks to the activity of the Belgian scientists, a new dinosaur species called "Halszkaraptor", in honor of the Polish paleontologist Halszka Osmólska was discovered in Mongolia. It is the first specimen that confirms that some dinosaurs swam.

The importance of their findings to this small European country is shown by The Royal Belgian Institute of Natural Sciences in Brussels with its fossilized Iguanodon skeletons, discovered almost 150 years ago. It also has the world’s largest museum hall entirely dedicated to dinosaurs.

Also, unlike some other European countries with great findings, Belgian Post did issue a beautiful sheet we just had to include in this article!

You know we always like to include a special stamp or two, and today it comes from Belgium’s neighbour – The Netherland! The Netherland is also more famous for its rich culture than dinosaur findings but in 1995 a very interesting semipostal stamp featuring a dino.

A semipostal stamp, also known as a charity stamp, is a postage stamp issued to raise money for a particular purpose (such as a charitable cause) and sold at a premium over the postal value.

This souvenir sheet starring a dino consists of 6 stamps designed by children drawing on a computer – and considering what computers could and could not do in 1995 this is truly a special one, especially because they expired in 2013.

Today we showed you just a glimpse of paleoethology on stamps – and there is really a lot more beautiful pieces if this is your area of interest. What is surprising is that many countries with great findings have a small number of issues so far but we hope for that to change soon!