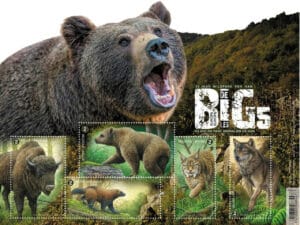 Lion, tiger or a cheetah – when you think of wild cats you definitely do not think of Europe. But, believe it or not, a long time ago Europe was home to many different species of wild cats. Today, there are only three European wildcats native to the area – the European wildcat, Eurasian lynx and Iberian lynx so it’s no surprise countries commemorate these rare species in many ways – including stamps.

The European wildcat is a wildcat species native to continental Europe, Scotland, Turkey and the Caucasus. It inhabits forests throughout the Iberian Peninsula, Italy, Central and Eastern Europe to the Caucasus.

The European wildcat is a shy and predominantly nocturnal creature, also active in the daytime when undisturbed by human activities. They are the ancestor of domestic cats which is very obvious looking at the European wildcat which resembles any old tabby cat – only a bit bigger.

Sadly, the cat has been extirpated in England and Wales so it’s no surprise that the national nature conservation organizations often commemorate it in many ways – including through stamps, with the first one issued in 1986.

More recently, in 2010 the Royal Mail published the fourth issue in their nature series, 'Action for Species'. The series examined UK species that are endangered now benefit from legal protection and active conservation measures. The issue included a 1st class stamp of a wildcat among other endangered species like water wolf, otter, hedgehog or humpback whale.

The Eurasian lynx is a medium-sized wild cat occurring everywhere from Northern, Central and Eastern Europe to Central Asia and Siberia, the Tibetan Plateau and the Himalayas.

Because of its wide distribution, it has been listed as Least Concern on the IUCN Red List since 2008. The Eurasian lynx population in Europe is estimated at 10,000 individuals and is considered stable.

Unfortunately, Eurasian lynx, quite common in most of continental Europe, got persecuted to local extinction in most of Western Europe, where only scattered and isolated populations exist today, but can be found throughout Scandinavia and Eastern Europe.

In 2014, the Lynx, alongside Brown Bear, Wolf, Wolverine and Wisent were voted as the most impressive animals of Europe, according to the Flemish TV show “The Big5 of Europe”. The final selection was revealed and presented to the former president of the European Council, Herman Van Rompuy, during the last episode. The final choice was made starting from a long list of 15 candidates and by ranking the animals according to four criteria: appearance, behaviour, rareness and the emotions they trigger.

Interestingly, this selection also got commemorated in 2020 on a beautiful stamp showcasing these impressive animals.

It was a big year for the lynx since it also got featured on a Swiss stamp – not as artistic as the abovementioned issue, but still beautifully showcasing this impressive animal.

The Iberian lynx is a fascinating wild cat species endemic to the Iberian Peninsula in southwestern Europe – more precisely Spain and Portugal. It is listed as Endangered on the IUCN Red List with the unfortunate title of the most endangered feline species in the world, according to the World Wildlife Fund.

In the 20th century, the Iberian lynx population had declined because of overhunting and poaching, fragmentation of suitable habitats and the fall in the population of its main prey species, the European rabbit.

By the turn of the 21st century, the Iberian lynx was on the verge of extinction, as only about 100 animals survived in two isolated subpopulations in Andalusia.

Five breeding centres, one in Portugal and the remaining in Spain, have been created when Portugal and Spain decided to join efforts to save this species.

The return of the Iberian lynx to the wild, which represents the second stage in the programme, started in Spain, where dozens of animals have already been released back into their natural habitat. Born and bred in one of the centres, Katmandu and Jacarandá were the first pair of lynxes returned to the wild within the Portuguese territory in 2014. The chosen setting for this emblematic moment was the Guadiana Valley Natural Park, in the Mértola Council, Alentejo. More animals were gradually released in the following years as part of a Portuguese-Spanish project aimed at preserving this species and the Mediterranean ecosystem.

By 2020 the population had increased to over 400 individuals, also according to the WWF.

The good, the bad, the special

European wildcat, Euroasian and Iberian Lynx are all wild animals found on the European territory, so it’s not surprising many of the countries where they can be found wish to commemorate them on stamps. But sometimes countries showcase an exotic animal for whatever reason.

In 2020 Vatican City issued a series Pope Francis with animals. As part of this collection, and the one with the highest face value of them all is the stamp starring the Pope with a black panther cub.

Cats are a very popular theme for stamp collectors all over the world. From the small tabby to large wildcats such as lions – every cat has a fan. Today we brought you some of the most interesting and recent stamps starring lesser-known European wildcats and a very special star of the show! Hope you enjoyed and found another collection niche to consider.