Philately and Eurovision Song Festival: And the Winner Is... 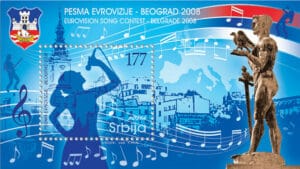 The Eurovision Song Contest is one of those European events well-known and very popular outside Europe. The Netherlands won the 2019 contest in Tel Aviv, Israel, but the magic started more than 60 years ago on May 24, 1956, in Lugano, Switzerland. History shall remember that Lys Assia won the first contest on behalf of France, with the song "Refrain".

Winner of the Eurovision Song Contest 2019

While 2019 belongs completely to Duncan Laurence and the song "Arcade", in this article we’ll try to cover a few more interesting facts related to the Eurovision Song Contest. For now, let’s stay in 2019. The contest was held in Tel Aviv, Israel thanks to Netta and her triumph in Lisbon in 2018, with the song “Toy”.

Fun Fact: The Eurovision Song Contest 1980 was held in The Hague/The Netherlands. The 1979 winner came from Israel, Gali Atari and Milk and Honey with song "Hallelujah"

How does History repeats herself sometimes ?...

Being the biggest music show in the world also brings a lot of responsibility and this contest again succeeded in spreading the message of love and equality from the stage and in the audience. Therefore, it’s not surprising to see a number of rainbow flags in the audience. The Eurovision song contest contributed a lot to freedom of speech and love, probably starting in 1961 when Jean-Claude Pascal won with the song "Nous les amoureux", continuing with the victory of a transsexual woman, Dana International in 1998 (Israel, song "Diva") and going even further in 2014 when a drag queen Conchita Wurst won on behalf of Austria with the song "Rise Like a Phoenix".

For the Netherlands, the 2019th edition was the 5th time the country won the Eurovision song contest title.

Still, during history, some countries performed much better. Ireland still holds the record with 7 Eurosong titles, followed by Sweden with 6 titles.

The 3rd place is shared by 4 countries: Luxembourg, France and the United Kingdom and the Netherlands with 5 titles each. Israel won 4 times, while Denmark and Norway did the same 3 times.

Though it would be completely unfair to say some winners were better or more famous than the others, we cannot ignore that ABBA has also competed in the Eurosong. It’s interesting that while they tried to compete several times, they managed to participate only once and, of course, win (1974 in Brighton with song “Waterloo”). Still, there are some other famous names that took part in the contest.

Céline Dion won on behalf of Switzerland with the song "Ne partez pas sans moi", in the 1988 contest, held in Dublin, on April 30. Julio Iglesias, was 4th for Spain, in the 1970 contest (held in Barcelona from February 12 to February 14) with the song "Gwendolyne". Sir Cliff Richard (born Harry Roger Webb), won 2nd place for the UK in the 1968 contest (song "Congratulations") and 3rd place in the 1973 contest (song "Power To All Our Friends").

OK, the Nethelands, won the Eurosong title this year. We could list all winners during the years when the contest was held, but we won’t do that. Still, something unusual happened in 1969, the year of Apollo 11 mission.

In 1969, there was no rule for the tie on Eurosong, so 4 countries (France, the Netherlands, Spain, UK) with 18 points shared the victory.

Who wasn’t part of the show?

Even though the name would suggest the participants are (only) European counties, that is not the case. While some countries were admitted for political reasons, some got admitted for huge popularity Eurosong has in their countries – last example being Australia who first competed in 2015.

There are also some countries that expressed the interest to be the part of the show but never actually made it.

They are (in alphabetical order): Catalonia, China, Faroe Islands, Gibraltar, Greenland, Kazakhstan, Kosovo, Lebanon, Liechtenstein, Qatar, Scotland, Soviet Union, Tunisia, Wales. Reasons were mostly political or the fact that some of them are actually not internationally recognized countries.

Starting in 2019, the Eurovision Asia Song Contest 2019 will take place for the first time. It will be held from November 30 to December 7, 2019, at the Gold Coast Convention Centre, Gold Coast, Australia. The expected participants are: Australia, China, Hong Kong, India, Indonesia, Japan, Kazakhstan, Maldives, New Zealand, Papua New Guinea, Singapore, Solomon Islands, South Korea, Turkey, United Arab Emirates, Vanuatu, Vietnam. Please notice that Australia is here too, even though they are also not located in Asia (like Europe – just saying 🙂 I just hope they use a different song 😀 Personally, I’m looking forward to seeing what they come up with.

You may remain calm. No matter if Brexit actually happens or not, there won’t be Eurosong Brexit.

The Eurovision Song Contest is really something special. Taking into account how popular it is at the moment, and that its popularity is growing, we can expect to get a better show each year. And, of course, a lot of Eurosong-related stamps. To me, this sounds like a really nice topic for the collection