Philately and History: WWI on Stamps 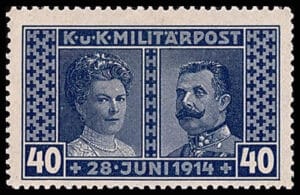 WWI was the first global conflict in World history with events taking place, with more or less intensity, on almost every continent.  It started on 28 July 1914 and lasted until 11 November 1918. Today we’ll focus mostly on the events that led to war and the outcomes of this conflict.

What led to WWI?

The tensions additionally rose after 1878 when Bosnia, accordingly Treaty of Berlin was nominally inside the Ottoman Empire but de facto was ceded to Austria-Hungary. Additionally, there was the Annexation crisis or Bosnian Crisis of 1908-09 after Austria-Hungary declared the annexation of Bosnia. Austria -Hungary was an empire with big internal problems. While Austria and Hungary were 2 main parts of the empire, Germans and Hungarians were not even the majority in the empire. Its’ population consisted of 23.3% Germans, 19,5% Hungarians, 12.5% Czechs, 11% Serbo-Croats, 9.7% Poles, 7.8% Ruthenianians, 6.3% Romanians, 3.8% Slovaks, 2.4.% Slovenians etc. All of the mentioned, except Germans, Hungarians and Romanians were Slavic, so easy math brings the total number of Slavs in the empire to somewhere between 45% and 50%. There were a lot of pan-Slavic tendencies, especially between South Slavs (Slovenians, Croats, and Serbs). They wanted reforms in the empire, or even better to form the Slavic state (that will later become Yugoslavia – including Slovenia, Croatia, Bosnia, Serbia, Montenegro, and Macedonia). After all, the situation was very complex internationally, but also inside the Austro—Hungary Empire.

The event which triggered the war was the assassination of the Archduke Franz Ferdinand of Austria and his pregnant wife Sophie, in Sarajevo, on 28 June 1914. The man who shot Franz Ferdinand and his wife was a Bosnian revolutionary named Gavrilo Princip. He was a member of the Serbian revolutionary group, called The Black Hand. These are some of his quotes, explaining what he did and what was the motivation behind it:

"I am not a criminal, for I destroyed a bad man. I thought I was right."

"I am the son of peasants and I know what is happening in the villages. That is why I wanted to take revenge, and I regret nothing."

"I am a Yugoslav nationalist, aiming for the unification of all Yugoslavs, and I do not care what form of state, but it must be free from Austria."

I guess nobody expected what will happen later. Austria-Hungary couldn’t just tolerate that, so the decision had been made to go to war with Serbia. Still, Serbia had powerful allies – France, the Russian Empire and the British Empire, so Franz Joseph I, the Emperor of Austria, King of Hungary, Croatia, and Bohemia, first ensured with Kaiser Wilhelm II of the German Empire that he’ll have his support.

The stage was set and Austria-Hungary declared the war on Serbia on 28 July 1914. Russia and France soon started the mobilization, and Germany joined in.

Who were belligerents in WWI?

Austria-Hungary and Germany shared numerous historical ties – the same language, many marriages between rulers, etc., maybe even more than other countries in Europe. Therefore, their alliance was pretty obvious and expected. Two more empires joined their cause – the Ottoman Empire and The Tsardom of Bulgaria, forming the Quadruple Alliance, also known as Central Empires or the Central Powers. The latter two had obvious reasons related to their territorial pretensions mostly in the Balkans.

On the other side were Entente Powers. These were France, the British Empire, the Russian Empire, Serbia, Montenegro, Belgium, Japan, Italy, Unites States, Romania, Portugal, Hejaz, China, Greece, Siam.

Was it the most destructive modern war?

As you could see, wars that took place after WWI had more casualties, and some had less. Still, all wars taking place before WWI, happened a long time before, and their duration was much longer (although the number of deaths compared to the total human population at that time was higher). So, we could say that WWI, with an estimated 16.500.000 to 30.000.000 casualties, was the most devastating war that took place until that time in history.

World War I had a major impact on the world, not only at that time, but it changed the course of history until these days.

Direct implications of the war were major territorial changes. Besides winners gaining new lands, it ended many empires in Europe. After the war, The German Empire, the Russian Empire, the Ottoman Empire, and Austria-Hungary disappeared from the map and many new countries were formed. The Russian Revolution started in 1917 and that led to the establishment of the Soviet Union in 1923.

The Treaty of Versailles (signed on 28 June 1919) led to the end of WWI. Still, many agree, that the way the treaty was formulated and signed wasn’t fair to Germany and that planted the seed for WWII.

Series: Centenary of Treaty of Versailles (2019)

Another important event after WWI was the establishment of the League of Nations. It was meant as a “control mechanism” that should prevent future wars. Unfortunately, that hasn’t worked as planned.

Many say that wars usually generate rapid advancements in technology and that is more or less true. When you’re faced with annihilation, you’ll probably do anything you could to avoid it. Also, human rights are not something states care about. So yes, technically you’ll achieve a lot in the short period, but the cost for that is pretty high. That was also the fact with WWI. So new technologies were introduced, some existing, but still pretty new, were improved. So, WWI brought to the scene tanks, aircraft, machine guns, gases, etc. But also, a lot of improvements in many fields – mostly medicine.

From a philatelic point of view, WWI also has a lot of curiosities. Trench warfare wasn’t fun at all – for all sides. You needed a way how to keep morale at least high enough so people don’t simply stop fighting each other. And one of the best ways was that they keep receiving information from their loved ones as well as sending news about themselves. So yes, billions of letters were sent to and from the front. This gives us a good insight into what ordinary people felt during the war and also is a good source for our philatelic collections.