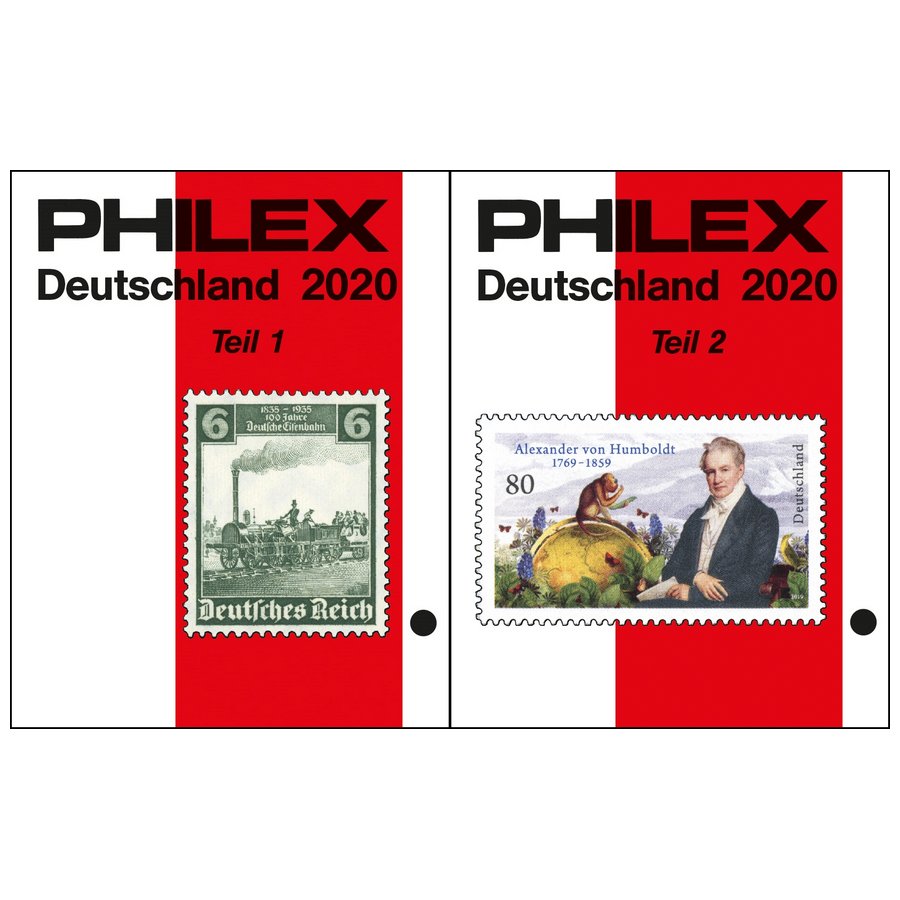 The 2020 edition of the Philex Deutschland catalog in two handy volumes covering all the collecting areas of Germany since the first issue till the end of 2019 emissions.

The first issue of the PHILEX Deutschland catalog appeared in 1960, at a time when the demand for a handy catalog became more and more apparent. From this beginning – a black and white catalog of circa 256 pages – Philex developed numerous catalogs from various European countries. In terms of shape, PHILEX has opted for the handy pocket format right from the start. The handy size of the catalogs gives the user the opportunity to use them when during the visit of the specialist dealer or a fair or at a stamp club reunion. PHILEX catalogs follow the Michel numbering system for the cataloging of the stamps. The philosophy of the PHILEX publisher is that the entire range of PHILEX catalogs should never claim to reach or even surpass prices of special catalogs for different collection areas, and shall provide the collector of a particular area with the highest level of information.

The PHILEX Deutschland catalog reached almost 700 pages in the 2008 edition. To keep the ease of use as easy to use as it has been for decades, the editorial committee of the catalog decided to split the catalog in 2 volumes us in 2009 (49th edition). PHILEX did not just do the division “until the end of World War II” for the first volume, and then all for the second. The first part would have been a thin volume with just 150 pages, and the part after 1945 would have been almost equal to the volume of the entire catalog of the 2008 edition. Thus, in order to accomplish a meaningful division, the Soviet occupation zone and the GDR were left in Part 1, which now includes 364 pages. Here, after revising the 1914/1918 staffing editions, PHILEX redrafted the German Reich and plebiscite areas.

As in both parts of PHILEX – Germany 2018, numerous editorial and price changes and additions have been made to these catalogs. In the 2018 edition, PHILEX introduced in both volume a list of the respective expert/examiner associations for some issues. The selling price of each volume of the 2020 edition is € 9.90.

The fact that in the second volume of the PHILEX Deutschland catalog are grouped, by far, the most popular collection areas – French, American-British Zone, Saarland, Berlin and the Federal Republic of Germany,  has made this volume very popular in a few years – as well as the selling price, which is very consumer-friendly for a stamp catalog issued regularly.

Of the popular country catalogs, 2018 are also part of the program: Israel, Austria, Switzerland / Liechtenstein and the Vatican. The United Nations Catalog 2016 remains valid.