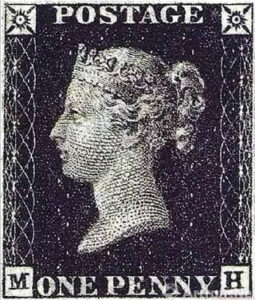 It was 1840 and we really needed postage stamps. If nothing else than to finally start collecting them ? Today we’ll talk about the first postal stamp in the World, the motivation to issue it, and how it all went down!

People were always smart and innovative, and especially so when they needed to be wiser than the government and earn or save some extra cash for themselves. We could say not much has changed, but that will be a story for another time. Today we will talk about how these smart and innovative men of the Victorian age led to the famous Penny Black being issued.

To do so properly, we have to go back in time, precisely to 1680 when an entrepreneur William Dockwra started a public service that was soon nationalized, which guaranteed the quick delivery of a letter anywhere in London. It was far from a perfect system, burdened with overcharging and unreasonably expensive tariffs for sending a single letter, but the weakest spot of the system wasn’t this – it was a now nationalized system which had no substitute for many people. The weakest spot was the fact that recipients were expected to pay. And, as you might imagine, this presented some problems, or, well, the opportunity for people to be smart and innovative, as claimed earlier. People weren’t home, “weren’t home”, flat-out refused to pay, and not to mention the blatant corruption. The system just didn’t work, but it remained in place for a long time.

It is now the 19th century and not much has changed in the postal service in Great Britain, but a lot has changed in the World, and the United Kingdom. Queen Victoria just started her regency in 1837 (lasted until her death in 1901) – that’s the famous Victorian era. At that time, paying for letters was still charged by the mailman to the recipient and not to the sender. And the recipient could refuse the delivery and of course not to pay for it. The price was calculated accordingly to the number of sheets sent and the distance letter traveled. The idea of reform of the Royal Mail existed for some time. There was a need to come up with new concepts to optimize the postage delivery system and make it more accessible to the masses (lowering the service price) as well as to reduce the amount of corruption and abuse of the current system.

This is where Sir Rowland Hill jumps in. Hill ran a progressive school and was also an accomplished painter, inventor, and essayist. In one of his most famous pamphlets, Post Office Reform, its Importance and Practicability, Hill argued for abolishing the postal tariffs and replacing them with a single national rate of one penny, which would be paid by the sender. The pamphlet later became the central part of the Uniform Penny Post, which was a part of the 19th century Royal Mail reform. The most important part of this reform was - one penny charge for mail delivery between any two places in the UK (Great Britain and Ireland).

The penny rate “went live” on the 10th of January 1840. After that prepaid letter sheets were introduced and finally on the 1st of May 1840 the first postal stamp was ever issued.

As already mentioned, the Penny Black was issued on the 1st of May 1840 and went into official use on the 6th of May 1840. It might look like a pretty simple design these days, but at the time it was very innovative.

First of all, you had to go with the motif, and since it was the first stamp ever they had to choose wisely. In 1839, Hill held a competition to design all the necessary postal paraphernalia, and the winning entry came from William Wyon, one of the most respected engravers at the time. He based the motif, the silhouette of the Queen Victoria, on the Wyon City Medal issued in 1837 to commemorate the Queen’s visit to London. Interestingly, she was 21 when the stamp was issued and the silhouette represented her at age of 15.  Hill then worked with artist Henry Corbould who refined the portrait and developed the stamp’s intricate background pattern.

It’s important to mention that nowhere on the stamp can the name of the country be found. This was and still is specific to the UK – the only country in the World that had a silhouette of the monarch on the stamp (as a motif or in corners) instead of the country name.

Finally, when they decided to produce the stamps through line engraving so engravers George Rushall and Charles, and Frederick Heath prepared the design for printing. They used 11 plates numbered 1 to 11, although plate 1 deteriorated quickly and was repaired to such an extent that it is generally considered as two separate plates - 1a and 1b - making 12 plates in total. The stamps were printed on large sheets each containing 240 stamps which were cut apart by scissors so there was no perforation.

Introducing the stamp played a crucial role in the development of postal services. Now you could simply walk into the post office, pay for your letter and the postal officer would use scissors to cut the stamp from the sheet.

The stamp was in use for just over a year and was issued in a little more than 68 million pieces so it’s not the rarest stamp in the World and not too expensive. Still, it’s a nice piece to add to your private collection, if possible. Interestingly, there were certain limitations related to the Penny Black that led to new stamps and new stamp designs. We’ll talk about them in one of the upcoming articles.