Postal History: The Penny Red and The Two Pence Blue 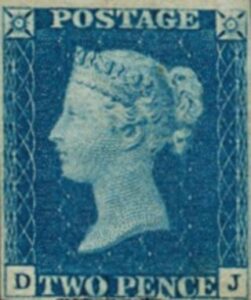 In one of the previous articles, we talked about the first stamp issued, the Penny Black. There is no doubt that it was an innovative concept but, in a way, it was only a prototype of what was yet to come. Some disadvantages were noticed when people started using it so improvements were soon implemented, and today we’ll talk about two important successors of this stamp.

The story behind Two Pence Blue (or Two Penny Blue) is pretty simple. It was planned for it to go live along with the Penny Black on the 6th of May 1840, but it went into sales 2 days later, on the 8th of May 1840, and became the second official postal stamp ever issued.

While the Penny Black could be used to send mail weighing up to half an ounce, the Two Pence Blue doubled the denomination and the weight and was used to cover postage of packages weighing over half an ounce. Because sending a letter, let alone a small parcel by post was alien to most people at the time, the stamp was rarely used, and therefore issued in much smaller quantities than the Penny Black.

Just like the Penny Black, the Penny Blue’s design was based on the medal engraving created by William Wyon of the Queen Victoria when she was only 15-years-old just in a different colour. It was issued in sheets of 240 stamps without perforations.

But, unlike the Penny Black which was used only for a year (and we’ll talk about reasons for that a bit later!) the Penny Blue was in use from 1840 to 1880. During that time, it went through several design changes like adding perforation (starting from 1854), adding letters in all four corners and using white or blued paper.

Maybe the most important design change it went through was adding white lines to the design. That happened in the “second” series of this stamp, printed in 1841. White lines, below the “POSTAGE” and above the “TWO PENCE” stayed in the design all the way until 1880. This makes the first series from 1840 the only one without these lines which makes it highly sought after – a stamp is now so much in demand that catalogue values have risen over 100% in just over a decade!

Also, the first series of Two Pence Blue included 6,46 million stamps compared to 68,15 million Penny Black stamps issued. That makes the 1840-series Two Pence Blue pretty rare in comparison to its black counterpart which only adds to its value.

Used Two Pence Blue value is measured in the hundreds of dollars while unused could be sold in tens of thousands of dollars.

It might be interesting to note that Mauritius issued 1p (orange) and 2p (dark blue) stamps in 1847 with almost the same design as their British relatives. These two stamps were printed in small series (around 500) and are extremely valuable, valuing from a few hundred thousand to even millions of dollars – in 2011, a Post Office Mauritius issue was sold for £1 million in an auction. So, if you have one – congratulations!

The Penny Black had one major flaw – it was initially cancelled with a red Maltese Cross cancellation which was obviously both difficult to see and easy to remove on a black stamp and then reuse it. That is the main reason that after the initial series of Penny Black there were no others, and why after a brief period of using black ink cancellations the Penny Black was replaced by the Penny Red.

But not before a series of Rainbow Trials came out, a series of trials to determine the best combination of stamp and cancellation colour. Special plates of three and 12 stamps were produced for the process. Stamps were printed in several colours and may be found cancelled in a variety of ways and sometimes virtually destroyed by the trials to remove those cancellations – one of the few occasions when it is acceptable to have a stamp in poor condition in your collection!

After having some fun destroying stamps, a winner was found and in 1841, the Penny Black was replaced and the Penny Red was introduced. It was reddish-brown and the cancellation used on it was black which was more visible and harder to rub off in an attempt to reuse the stamp. Similar to Two Pence Blue, it underwent many design changes and remained in service until 1879.

Initially, the same plates used to print the Penny Black and early printings of Two Pence Blue were used to print the Penny Red. The stamp had no perforations, and had to be cut from the sheet using scissors. In time changes were made including adding perforations, engraving plate numbers and replacing the stars in the top corners with the same check letters as in bottom corners but in reverse order.

The era of the Penny Red came to its end at the end of 1879, when it was replaced by the Penny Venetian Red. Printed by security printing company De La Rue, it was the third one-penny stamp to enter regular usage in the country. Visually distinctive from its precedents it was in use for a little over a year before being replaced by the long-lived Penny Lilac.

There is a controversial view in the philatelic community that the Penny Red is the poor man’s Penny Black and the logic of it is that, after all, a fine single Penny Red will cost you a fraction of the price of an equivalent Penny Black. This is not surprising as the black stamp was on sale for only nine months, while its red equivalent lasted for 13 years, and in a period when literacy and therefore letter-writing was growing fast. You most likely won’t earn a fortune if you own one of these, but still, you’ll own a nice piece of history. Still, that is not always the case – maybe you have some incredibly rare example that is worth a real fortune.

« Television and Stamps: Only Fools and Horses
Postal History: 1840 - The Penny Black »