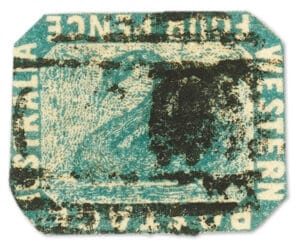 We’ve already talked about the rarest stamps from Germany, France, the UK, Ireland, and Belgium and the Netherlands. Today, we’ll leave Europe and take a look at the rarest and most valuable Australian stamps. We’ll see kings and queens, maps and animals, and, of course, mention some interesting facts related to these stamps. So, let’s go Down Under.

Seeing a monarch’s portrait on the stamp designs from the 19th century is definitely not uncommon. Australia became British territory in 1770 when Capitan Cook’s ship Endeavour reached it for the first time, and James Cook claimed Australia as a British territory. The actual colonization started in 1788 when a fleet of 11 ships, transporting a governor, British troops and 736 convicts set up a colony in New South Wales (Port Jackson, modern day Sydney Harbour). Later, other colonies were established. All 6 British colonies were: New South Wales, Victoria, Queensland, South Australia, Western Australia and Tasmania.

For us, it’s important that colonies issued their stamps.

“New South Wales issued the first stamps in Australia on 1 January 1850, introducing prepayment of postage with simplified charges for mail:

The other Australian colonies followed the lead of New South Wales and adopted prepayment of postage by issuing stamps – Victoria (then known as Port Phillip District) on 3 January 1850, Tasmania (then known as Van Diemen’s Land) in 1853, Western Australia in 1854, South Australia in 1855 and finally Queensland in 1860. Thus by 1860, Australia had six colonial postal systems, each issuing its own stamps, a practice that continued until after Federation.” (https://australiapostcollectables.com.au/articles/stamps-through-time-nineteenth-century)

One of these stamps is 1850 Classic Queen Victoria stamp you can see above. This stamp is on the #5 on our list of the most valuable Australian stamps. When the stamp was printed, it was only a short run, and therefore even a much smaller number of these stamps survived to this day. Among these which survived is the set of 4 stamps, known as strips. In October 2006, a 1850 Classic Victoria strip sold for A$94,875 in Sydney. Although two of the stamps have slight damage, its scarcity remains enough to attract eager collectors. (https://themarketherald.com.au/fancy/modern-philately-rare-australian-stamps-exciting-the-new-generation/)

The Australian colonies of New South Wales, Victoria, Tasmania, South Australia and Western Australia, and the Northern Territory, federated into one country in 1901. Still, we had to wait for some time that Australia, as a country, starts issuing postal stamps.

The stamps and postal history of Australia can be divided into two periods: before 1913 with ‘Australian States’ stamps issued by the Australian colonies of Great Britain and after 1913 when the newly formed Commonwealth of Australia introduced stamps inscribed ‘Australia’.

In 1911, the Australian government launched a Commonwealth Stamp Design Competition which attracted more than a thousand entries. Three designs were selected to receive cash prizes, however, the Design Competition was considered a failure. Hence, the Postmaster General of Australia - C.E. Frazer - commissioned the artist Blamire Young to produce a new series of designs. (https://www.stanleygibbons.com/collecting-stamps/dispatches/kangaroo-and-map-stamps-australian-classic)

The story behind the Red King stamps is actually very interesting. The reason why it’s so valuable is one of the most common – it’s pretty rare. And the reason why it’s rare is that all originally printed stamps, 71 million of them, were destroyed. Edward Albert Christian George Andrew Patrick David, also known as King Edward VIII ruled the United Kingdom from 20 January to 11 December 1936. He abdicated and the reason was he married Wallace Simpson.

“The duke always said that not once did he regret the abdication, because he was so happy.”

Around 2 months before that Australia started printing stamps of King Edward VIII in his naval uniform. These stamps are also known today as KEVIII.

After the abdication, all existing stamps were destroyed except the few of them. Today we know that 6 of them exists, and they are so rare that Australia Post nor the Queen have one in their collection.

I’ve placed this stamp as #2 on the list of the most valuable Australian stamps, because the single stamp has a lower value than the single #1 stamp from our list. Still, the sheet of 6 these stamps is more valuable.

And we came to the #1 on our list of rarest and most valuable Australian stamps – The Inverted swan stamp. This one is valuable, not only for being old, but also having a common error that makes a stamp valuable – and that is invert. This is a common error that happens when stamp goes through the printer twice, and the central motif is printed in the way it shouldn’t have been.

Please also notice that this stamp was issued by Western Australia. As we’ve mentioned before, until 1913 colonies issued their stamps.

In 1855, this error appeared on 388 stamps, before it was noticed and everything was setup for printing as intended. Today we know that 15 examples of these stamps survived and all of them are cancelled.

While you wait for the new articles, feel free to check previous articles from this series:
UK - Rarest Stamps: Most Valuable UK Stamps