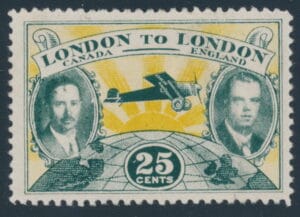 We’ve already talked about the rarest stamps from Germany, France, the UK, Ireland, and Belgium, the Netherlands and Australia. Today we’ll take a look at the rarest and most valuable Canadian stamps.

How Large is Canada?

We’re all aware that Canada is a large country, but let’s take a look at that fact once more. Today, in 2022, Canada is ranked as #2 in the world when we take into account land area as well as area taken by inland rivers, reservoirs, lakes, etc.

Note: Canada has a really large number of lakes. It’s estimated that 7.6% of Canada is covered with fresh water and that there may be as many as 2 million lakes in Canada. Out of these, 561 lakes have a surface area larger than 100 km2, including four of the Great Lakes.

In 2022, the ranking of countries by their size is:

So, Canada is not only large, but also, it’s not the easiest country to cross “on foot”. Therefore, it’s no wonder that among the rarest and most valuable Canadian stamps, we’ll also see 2 beautiful Air Mail stamps.

The first of these two Air Mail stamps is at #5 on our list of the most valuable Canadian stamps. The original stamp had been issued on June 24, 1897, and the motif is King Henry VII (Hans Holbein the Younger, "King Henry VII", circa 1536 National Portrait Gallery, London, United Kingdom).

“On 5 March 1496, King Henry VII granted a letters patent to John Cabot and his sons. This permitted them to investigate, claim and possess any new lands so long as they did not intrude on Spanish or Portuguese territories.” https://www.heritage.nf.ca/articles/exploration/1496-cabot-patent.php

In 1927, 300 of these were (over)printed with “Air Mail DE PINEDO 1927” in red. This overprint meant that letters with these stamps were intended to be flown by Italian aviator Francesco de Pinedo. It’s known that among these letters, about 60 had Henry VII 60c stamp on them. It’s known that today 33 of these stamps in mint condition exist.

Today Canada used Canadian dollar as a currency, but it was not always like that. Similarly, to many other GB colonies, Canada also used Pound at some point. Canadian Pound had been in use from 1841 to 1858. After the introduction of the Canadian dollar, few other currencies were in use in the same period - New Brunswick dollar, British Columbia dollar, Prince Edward Island dollar, Nova Scotian dollar, Newfoundland dollar. Some of these lasted shorter, some lasted longer.

The important thing for us here is that on the #4 of our list we can see the 3d Vermillion Stamp since it dates back from the period when Canadian Pound had been used. Three-Pence Beaver stamp is the first stamp issued in Canada and also the first stamp without the picture of the monarch.

“In 1851, the British Crown transferred authority to the Province of Canada for the management of its own postal system, whereupon Canada hastened to issue postage stamps so as to give tangible form to its new authority. Only two days after being instructed to reorganize the Post Office from top to bottom, James Morris met with Sandford Fleming in Toronto, on 24 February 1851, to discuss certain details concerning postage stamp illustration. During this meeting, Fleming suggested the idea of using the beaver to illustrate the first Canadian postage stamp. The proposal was audacious, to say the least, for it broke with the tradition hitherto observed in the British Empire of using the effigy of the monarch to illustrate postage stamps. Sandford Fleming felt that the beaver was totally appropriate, since this characteristic specimen of Canadian wildlife, known for its industriousness, its building skills and its tenacity, was the perfect representative of a young nation occupied with building its future in a land that was still virtually undeveloped. The beaver was also evocative of the colony’s beginnings, since beaver pelts were one of the first articles of trade between Amerindians and the French who disembarked in New France.” - The Three-Pence Beaver: Canada's First Postage Stamp (1851)

As previously stated, Air Mail was a pretty practical way of transporting mail, especially if you’re doing it over the ocean 😊
“In 1927, Carling Breweries offered a $25,000 prize to the first Canadian or British pilot to fly from London, Ontario to London, England. A Stinson SM-1 was christened Sir John Carling and attempted the flight starting August 29, 1927, flown by pilot Terrance Tully and navigator James Medcalf.” - Sparks Auction

Besides the plane, two portraits on the stamp are Terrance Tully and James Medcalf. Only 100 of these stamps were printed and only 13 survived after flight carrying envelopes with these stamps disappeared somewhere over Atlantic.

The last 2 stamps from our list of the rarest and most valuable Canadian stamps both have the bust of Queen Victoria as a motif.

The first of these 2 stamps is also the rarest Canadian stamp. While it was printed in 1868 it was not until 1925 when the stamp got “discovered”. There were many doubts if this is an authentic stamp or not at that time. Until today, only 3 of these stamps, all cancelled, are known to exist.

The last stamp in our list and the most valuable Canadian stamp at this moment is 12d (black) Queen Victoria with the motif of young Queen Victoria. While initially a large number of these stamps were printed, due to their high value only a smaller number of them were sold.

Today we’ve seen some of the rarest and most valuable Canadian stamps. While you wait for the new articles, feel free to check previous articles from this series:
UK - Rarest Stamps: Most Valuable UK Stamps