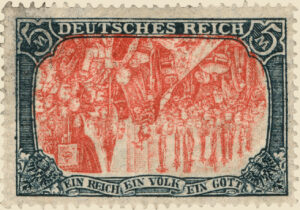 Rare and valuable stamps are these parts of collections most philatelists are most proud of. Today we’ll take a look at some of the most valuable German stamps.

Of course, we all know where is Germany today, but the question is where it was in the past. German unification officially happened on 18 January 1871 when the German Empire had been formed (Otto von Bismarck was the mastermind behind the unification). Before that German realm had been split into different states - North German Confederation, Kingdom of Bavaria, Kingdom of Württemberg, Grand Duchy of Baden, Grand Duchy of Hesse. For us, this is important because these states issued stamps and we’ll see some of them today.

The other important thing to mention here is that, as this is usually the case with valuable stamps, most of the stamps we’ll see today are errors of some kind.

This stamp had been originally issued in 1905. The motif on the stamp is Kaiser Wilhelm II giving a 25th German Empire's anniversary speech in 1896. Because of their high face value (5 Marks), stamps were printed in sheets of 20. Stamps with this design were printed all the way to 1918.

The inversion error we can see above happened during World War I. Inversion errors are almost always the consequence of printing “bicolor” stamps in two passes. In the first pass, the frame would be printed on one machine, and in the second pass, the motif would be added on the second machine. In case, you’ve inverted the paper before the second pass, you’ll get an error and nice valuable stamps.

For rare stamps, it’s always hard to exactly estimate how many of them are still alive because some may not have been discovered or their owners don’t want us to know. Still, from what we know, some 20 to 30 of these stamps are still out there.

And what about their price? If you own one, congrats. This tiny piece of paper is worth around 34.000 Euro.

One kreuzer black (Schwarzer Einser) was issued on November 1, 1849, in the Kingdom of Bavaria. It was not only the first stamp issued in Bavaria, but also the first stamp in the German realm (modern-day Germany). It was removed from sales in October 1851, but the stamp remained in use until August 31, 1864.

The older the stamp is, there is a greater chance it will be more valuable. If you add some kind of error to that, that’s a huge plus. But if that error happened on a small sample, that could mean you’re really rich. We have 3 conditions here that will determine if the stamp is valuable or not. We can combine them too. Of course, having a stamp where all 3 of them stand, would be the best scenario. Still, if 2 out of these 3 are true, your stamp could be also valuable. That is the case with our next stamp. It’s not old, but has an error and is rare.

While it looks pretty ordinary, this 2016 German stamp has a typo. On the first stamp “Vrolijk kerstfeest” is spelled correctly in Dutch. If your stamp has “Vrolijk Kerstfest” on it, congrats, you’re lucky. A sheet of these 10 stamps could be sold somewhere between 30.000 and 100.000 Euro.

This stamp is valuable for similar reasons as the previous one. While there was no printing error, this stamp became rare. Originally 14 million of these were printed, but due to the rights (Audrey’s son intervened here), almost all of them were destroyed. It’s believed that only 2 sheets of 30 survived.

And we got to the number 1 on our list. This stamp satisfies all 3 conditions to be expensive – it’s an old and rare stamp with printing error. The plan was to print 9 kreuzer in pink color. Somehow papers were switched and the 9 kreuzer had been printed in green color, used to print 6 kreuzer.