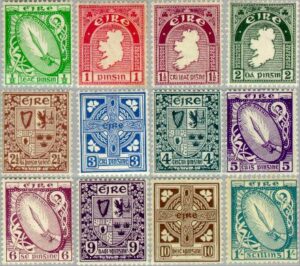 We’ve already talked about the rarest stamps from Germany, France, and the UK. Today we’ll talk about Ireland and add a little bit about postal history and most valuable Irish stamps.

The Irish War of Independence (Cogadh na Saoirse) lasted from 21 January 1919 until 11 July 1921. The result of this war was signing the Anglo-Irish Treaty on 6 December 1921. That led to a ten-month transitional period overseen by a provisional government. On 6 December 1922 the Irish Free State was created.

Together with this political change, philatelic changes also took place. In 1922, Oifig an Phoist (The General Post Office / An Post) had been founded in order to take care of the stamp production and mail delivery.

As you could see, all stamps from 1922 were overprints of King George V with value ranging from ½ p to 10 s. This was directly related to the fact that the Irish Free State was created on 6 December 1922. This led us to the release of first 12 Irish stamps.

Sword of Light, Map of Ireland, Coats of Arms of the Four Provinces and St. Patrick, and Celtic Cross in different color variations

As we can read here: “In February 1922, Postmaster General J.J. Walsh TD launched a competition to design stamps for the nascent State. Designs were required to be 'symbolical in character, and the inscriptions must be in Gaelic characters'. A prize of £25 was offered for each design accepted.”

“Designs by James Ingram, Lily Williams, John J. O'Reilly and Millicent Grace Girling were selected and Ingram’s design was the first Irish designed stamp used in the independent Free State. The denomination was 2d, two old pennies. Printed in deep green on white wove paper, it was watermarked with a monogram S.E. for Saorstát Éireann. In a frame of a Romanesque arch, shamrocks and Celtic-revivalist zoomorphic ornamentation, it featured a map of Ireland without designating the border, 'the image had political as well as symbolic importance’.”

Ireland, as an independent state, is here for almost more than 100 years now. No wonder that led to a number of stamps being produced along the way with some of the achieving high prices today. Now we’ll take a look at some of these and explain why they are so valuable.

Stamp errors are simply a gold mine. This stands for Ireland, but other countries as well. We’ll take a look at the two of them.

This stamp error doesn’t have as interesting story as the previous one, and is a classic example of a printing error. Stamps that are the ones with the actual high values are these with brown print omitted.

In this section, we’ll check three more valuable stamps. Unlike the previous two, which are newer and have higher value due to errors, these three stamps hold their value for being old and rare.

The least valuable out of these three is a King George V red overprint dating back from 1922. At that time, what would become An Post later, worked with what they had. And they had a number of King George V stamps.

The 2nd most expansive old Irish stamp is also a 1922 King George V overprint. Since this one had been originally printed in small numbers, this high value comes directly from that fact. It’s believed that only 5 unused are in existence today.

The most valuable old Irish stamp, but also the most valuable Irish stamp over all is a 1935 2d Map of Ireland stamp. The design is the same as was the design of the 1922/1923 stamp, but new and innovative technique (top and bottom were perforated while left and right sides were imperforated). It’s believed that only 20 mint examples, with a few used and a few more on covers, are in existence these days.

From the philatelic perspective, countries (or territories) that were established after stamps already existed are very interesting because these political changes also produced a number of interesting stamps – ranging from overprints to the first stamps printed in that country. Many of these stamps were produced in really small quantities and therefore can achieve high values. We could see that today, on the example of Ireland. Therefore, don’t miss upcoming the articles in this series, because we’ll have more philatelic intrigues related to history and politics.

And while you wait for the new articles, feel free to check previous articles from this series covering:
UK - Rarest Stamps: Most Valuable UK Stamps