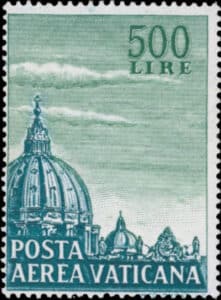 We’ve already talked about the rarest stamps from Germany, France, the UK, Ireland, and Belgium, the Netherlands, Australia, Canada, Spain, Portugal., and Israel. Today we’ll take a look at the rarest and most valuable Vatican stamps.

The history of Vatican is long and dates back to the early days of Christianity and the Roman Empire. In the 4th century, Emperor Constantine converted to Christianity and donated the land to the Church. He also “began constructing a basilica over St. Peter’s tomb in 324. St. Peter’s Basilica became a spiritual center for Christian pilgrims, leading to the development of housing for clergymen and the formation of a marketplace that became the thriving commercial district of Borgo.”

The Vatican was officially established as a sovereign state in 1929 by the Lateran Treaty between the Holy See and Italy. “Signed by Benito Mussolini on behalf of King Victor Emmanuel III, the pacts established Vatican City as a sovereign entity distinct from the Holy See, and granted the church $92 million as compensation for the loss of the Papal States.”

Issuing stamps would inevitably lead to the formation of philatelic society one day. That was also the case with the Vatican Philatelic Society.

"In 1952 a twenty-one year old philatelist and stamp dealer from Stratford, Connecticut named William Wonneberger published a series on Vatican philately in Linn's Stamp News.  In response he received numerous letters suggesting that he start a society for Vatican collectors, whose ranks had swelled in the years after World War II.  In May 1953, Wonneberger and some of his correspondents founded the Vatican Philatelic Society.  Wonneberger served as the Society's first president from 1953 to 1962. The next month, Vatican Notes, the official journal of the society, was published for the first time.  Initially mimeographed and published monthly, in 1955 it began to be published bimonthly in a larger, fully illustrated format.  In 1960, VN won a bronze medal at the International Philatelic Congress and Exhibition in Barcelona, Spain." – from Vatican Philatelic Society

Rarest and Most Valuable Vatican Stamps

Let’s now move to the top 3 list of rarest and most valuable Vatican stamps. We’ll start from the 3rd place in the list.

The 500L Dome of St. Peter's stamp was issued by the Vatican in 1958 to commemorate the completion of the dome of St. Peter's Basilica in Rome, and it features a photograph of the dome, which was designed by Michelangelo and completed in 1590. The dome is a symbol of the Catholic Church and is one of the most iconic architectural structures in the world. This stamp is considered a must-have for stamp collectors and those interested in Vatican City history. It has been issued with a face value of 500 Lire and is considered to be a valuable stamp due to its historical significance and age.

The second stamp in our list, and the 2nd most valuable Vatican stamp is 10c Papal Coat of Arms, with design originally from 1929, and overprinted in 1931 with “SEGNATASSE” (postage due). It was actually the trial, and most of these were destroyed and it’s believed that only 10 of them exists today. So, pretty rare stamp, and a nice value too.

And we’re at the top of our short list. The most valuable Vatican stamp is Effigy of Pope Pius XI - 1934 Overprint. Again, the stamp dates back to 1929, and in 1934 there was a trial overprint, changing the value from 1.25 ₤ to 1.30 ₤. Only one sheet had been sent to the post office by mistake with half of the stamps used. Therefore, this is also one very rare and also expensive stamp.