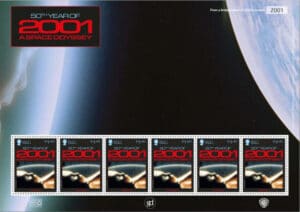 2001: A Space Odyssey is a 1968 SF movie directed by Stanley Kubrick and based on the short story "The Sentinel", written by Arthur C. Clarke. On July 14, 2018, Isle of Man post released 8 stamps and few stamp sheets to celebrate 50 years of this movie.

Today we’ll take a look at these stamps and some less-known facts related to the movie.

#1 If you think that movie itself was long (2h 29min) please take into consideration that the total footage shot was some 200 times the final length of the film.

"2001 A Space Odyssey is slow, because the material is designed to inspire thought, upon what appears on the screen. There are messages in picture form designed to lead you."

#2 During the premiere, 241 people, including Rock Hudson, walked out. Rock commented “what the hell” the film was about. During the first few weeks, the movie also was not a financial success and MGM seriously considered canceling it.

#3 For the moon surface scenes, Stanley Kubrick had several tons of sand imported, washed, and painted to resemble the color of the Moon’s surface.

Stanley Kubrick in the midst of creating movie magic

#4 According to Clarke, Kubrick wanted to protect himself from losses with an insurance in the event that extraterrestrial intelligence was discovered before the movie was released.  He was refused by the insurance company.

Arthur C Clarke pictured on set, standing in front of the pod

#5 One quote from Arthur C. Clarke: “If you understand ‘2001’ completely, we failed. We wanted to raise far more questions than we answered.”

#6 Movie had a total 88 minutes without a dialogue. Out of them, 25 minutes were also the first 25 minutes of the movie. Same was the case with the last 23 minutes of the movie. “The film originally had a running narration of what was happening, which would have made it much more like other sci-fi shows of its time. But Kubrick removed the narration before the movie was released (which came as a huge surprise to Arthur C. Clarke, who’d written it), leaving much of the film’s meaning open to interpretation.”

#7 There was also no sound (except film’s music) during space sequences. This is pretty logical because there is no sound in space.

#8 There were many changes in the movie, but one of the important was changing protagonists in the famous scene that include monkeys. The original plan was to have primitive and more human-like makeup for naked actors. To avoid having X-rating, Kubrick decided to go with hairy monkey model. All monkeys were humans in costumes, besides two baby chimpanzees.

#9 Kubrick asked Carl Sagan for help regarding extraterrestrial life. Although that cooperation hasn’t lasted for long, let’s hear few words from Carl Sagan (from his book The Cosmic Connection: An Extraterrestrial Perspective): “I argued that the number of individually unlikely events in the evolutionary history of Man was so great that nothing like us is ever likely to evolve again anywhere in the universe. I suggested that any explicit representation of an advanced extraterrestrial being was bound to have at least an element of falseness about it and that the best solution would be to suggest, rather than explicitly to display, the extraterrestrials.”

#10 There was a plan to end the film with Bowman (transformed into the Star Child by aliens) detonating a string of nuclear weapons in the orbit of the Earth. Kubrick decided not to go into that direction. In this interview, Kubrick describes the actual ending and talks about how Dave is basically placed in a zoo for humans by godlike aliens who study him until finished, then they transform him into a super being sent to Earth.

In a 1968 interview with Playboy, Kubrick stated:

"You're free to speculate as you wish about the philosophical and allegorical meaning of the film—and such speculation is one indication that it has succeeded in gripping the audience at a deep level—but I don't want to spell out a verbal road map for 2001 that every viewer will feel obligated to pursue or else fear he's missed the point."

#11 Name that was originally planned for HAL was Athena and the voice should have been female. Something like that happened in the sequel, 2010: The Year We Make Contact, where SAL 9000 (voice of Candice Bergen), a female version, took HAL’s place.

"I am putting myself to the fullest possible use, which is all I think that any conscious entity can ever hope to do."

"Look Dave, I can see you're really upset about this. I honestly think you ought to sit down calmly, take a stress pill, and think things over."

"I am feeling much better now."

Writing this article definitely encouraged me to watch it again. Also I hope that we all learned something today about this fascinating movie.