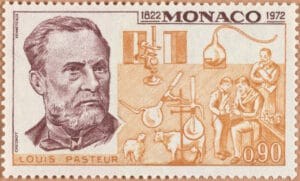 Louis Pasteur and Robert Koch are two of the most important scientists in history when we’re talking about diseases and how to prevent and/or cure them. Today, we’ll take a look at postal stamps related to these two brilliant minds and also remind ourselves of some of their most important achievements.

Louis Pasteur (Dole, Jura, France, December 27, 1822 – Marnes-la-Coquette, France, September 28, 1895) was a French scientist well-known for his works as a biologist, microbiologist, and chemist. His most important work is related to the discoveries of the principles of vaccination, germ theory, and pasteurization.

Although the germ theory was well-known before him (since the Middle Ages), his experimental work proved that certain types of micro-organisms that infect humans and animals are related to certain diseases.

"Science knows no country, because knowledge belongs to humanity, and is the torch which illuminates the world. Science is the highest personification of the nation because that nation will remain the first which carries the furthest the works of thought and intelligence." - Louis Pasteur

His second well-known work, dating back to 1865, is the one holding his name even these days. The pasteurization process is used to sanitize protect (sanitize) sensitive food, e.g. milk, beer, and wine, from germs. In the process, food is first heated to temperatures high enough to kill any sort of bacteria. After that the food is cooled down, and ready to be used safely.

"There does not exist a category of science to which one can give the name applied science. There are science and the applications of science, bound together as the fruit of the tree which bears it." - Louis Pasteur

Sesquicentenaire of the birth of Louis Pasteur

The previous two discoveries, experiments with the germ theory and the pasteurization, were crucial for his work on the vaccines. He experimented a lot with rabies and used rabbits for his experiments. Today, we take this for granted, but at that time it was a really big scientific breakthrough. The idea was to remove tissue from the infected animal, dry it out, and use that tissue to infect the healthy animal. Since microorganisms in such tissue were not so “strong”, that gave body enough time to train the immune system and develop antigens.

"One must work; one must work. I have done what I could." - Louis Pasteur

"Science knows no country, because knowledge belongs to humanity, and is the torch which illuminates the world." - Louis Pasteur

While most of the Louis Pasteur work was related to viruses, we’ll remember Robert Koch mostly for his work related to bacteria.

His most important works are related to anthrax, tuberculosis, and cholera. He was the first one able to prove that a certain bacterium is linked to a specific disease. In this case this was anthrax. Besides that, he also determined what was the ideal environment for anthrax to spread. Finding the ideal environment for the spread of disease is a crucial step in preventing the spread.

"Our studies have shown that all cases of typhoid of this type have arisen by contact, that is, carried directly from one person to another. There was no trace of a connection to drinking water." - Robert Koch

In 1905, Robert Koch was awarded the Nobel Prize in Medicine regarding his work related to tuberculosis. In short, he discovered the tubercle bacillus, as well as the nature of the bacillus and the principal source of the disease's transmission, leading to the successful fight against tuberculosis.

"From my numerous observations, I conclude that these tubercle bacilli occur in all tuberculous disorders, and that they are distinguishable from all other microorganisms." - Robert Koch

"To prove that tuberculosis is caused by the invasion of bacilli, and that it is a parasitic disease primarily caused by the growth and multiplication of bacilli, it is necessary to isolate the bacilli from the body, to grow them in pure culture until they are freed from every disease product of the animal organism, and, by introducing isolated bacilli into animals, to reproduce the same morbid condition that is known to follow from inoculation with spontaneously developed tuberculous material."  - Robert Koch

Centenary of the Discovery of the Tuberculosis Bacillus

It’s important to mention that Robert Koch formed the checklist that should be used to prove that a certain bacterium is the cause of the disease. We know it today as Koch’s postulates. There are 4 of them.

1. The bacteria must be present in every case of the disease.

2. The bacteria must be isolated from the host with the disease and grown in pure culture.

3. The specific disease must be reproduced when a pure culture of the bacteria is inoculated into a healthy susceptible host.

4. The bacteria must be recoverable from the experimentally infected host.