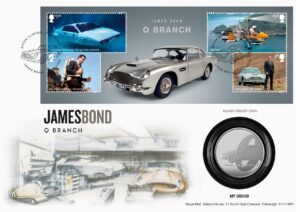 His code is 007, and his name is Bond, James Bond. He’s an intelligence officer in the Secret Intelligence Service, also known as MI6. It all started in 1953 when Ian Fleming published “Casino Royale”, in the first of his novels. Today, we’ll take a look at Royal Mail stamps issued to mark the 25th, and latest, James Bond movie “No Time To Die”.

“No Time To Die” is a 25th movie in the series. We’ll see, Daniel Craig once more fighting a vicious villain(s).

Having this in mind, let’s remind ourselves of some of the most important titles in this series. There are 25 Eon (EON Productions) movies, and 2 non-Eon movies – “Casino Royale” (1967), “Never Say Never Again” (1983).

Lotus Esprit Submarine – “The Spy Who Loved Me!

Little Nellie – “You only Live Twice”

Please notice how is “007” used on perforation

We’ll focus on Eon movies here. It all started in 1962 with “Dr. No” and continued until today with the following titles:

"You only live twice: Once when you are born and once when you look death in the face" - Sean Connery, You Only Live Twice

"Well, I like to do some things the old-fashioned way." — Daniel Craig, Skyfall

A number of actors portrayed James Bond. Some of them had more success and some had less. I guess you would know some without taking a look at this list, and you’ve probably haven’t heard of others. So, let’s see the list.

Sean Connery was the first James Bond and he appeared in 5 Eon files (Dr. No, From Russia with Love, Goldfinger, Thunderball, You Only Live Twice, Diamonds Are Forever) and 1 Non-Eon film (Never Say Never Again).

David Niven appeared in 1967 in the Non-Eon movie Casino Royale.

George Lazenby had also had one appearance in 1969 On Her Majesty's Secret Service.

Live and Let Die, On Her Majesty’s Secret Service, Goldfinger

"The World Is Not Enough" ― George Lazenby, On Her Majesty's Secret Service

We could watch Roger Moore, from 1973 to 1985, in 7 James Bond movies: Live and Let Die, The Man with the Golden Gun, The Spy Who Loved Me, Moonraker, For Your Eyes Only, Octopussy, A View to a Kill.

He was succeeded by Timothy Dalton in 1986. He lasted until 1994 and appeared in only 2 movies The Living Daylights, and Licence to Kill.

Live and Let Die, On Her Majesty’s Secret Service, Goldfinger

After that we could watch Pierce Brosnan from 1994 until 2004 in 4 movies: GoldenEye, Tomorrow Never Dies, The World Is Not Enough, and Die Another Day.

The last and the current Bond is Daniel Craig. As already mentioned, we’ll be able to see him soon in No Tim To Die. Before that, he had 4 more appearances in Casino Royale, Quantum of Solace, Skyfall, Spectre.

"Surround yourself with human beings, my dear James. They are easier to fight for than principles." ― Daniel Craig, Casino Royale

Who is your favourite Bond? And in which movie? Are you nervous to put your hands on these stamps? Tell us in the comments below.