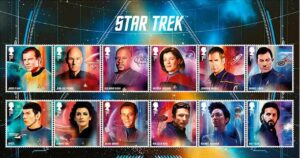 “Space, the final frontier….”. This article, as well as upcoming ones, will beam us up into the Star Trek universe. We’ll meet Vulcans, Klingons, Romulans, Ferengi, Cardassians, Humans, and Borg.

A Star Trek franchise is probably the most important SF franchise of all times (maybe Star Wars fans wouldn’t agree on this statement). In this article, we’ll cover some general facts regardless of single series or movies, while in upcoming articles we’ll focus more on single series and some other details.

1966 is the year when it all started. Gene Roddenberry is the father of the whole franchise. The first television series was called simply Star Trek and was filmed from 1966 to 1969. This series had and still has an enormous impact on SF in general and who knows what kind of SF stuff we would watch today if it hadn’t existed!? I would bet that, without it, we would watch less quality series and movies today.

Back to 1966. USS Enterprise, commanded by Capitan James T. Kirk (William Shatner) went where nobody went before. Some notable members of his crew were Spock (Leonard Nimoy), Montgomery "Scotty" Scott (James Doohan) - yup the one "Beam me up, Scotty",  Dr. Leonard "Bones" McCoy (DeForest Kelley), Uhura (Nichelle Nichols), Hikaru Sulu (George Takei) and Pavel Chekov (Walter Koenig). As you can expect, they went where nobody went before and thus had some adventures nobody had before. We’ll go more detailed into that in the article devoted to the original series.

Celebrate the Century, 1960s - The Rebellious Sixties and Man on the Moon

50 years to the future

After more than 50 years, the Star Trek franchise is pretty much alive these days. There were some great and some not so great series and movies along the way. Let’s remind ourselves of a few of them.

Let’s start with listing all series filmed so far:

and continue with all movies:

Technology in the series and movies changes a lot. Filming technology and special effects also experienced many improvements. Still, one thing stayed the same. That is the vision of the utopian and idealistic society where everybody gets everything they need (hm, this sounds familiar ) and where peace, collaboration, and exploration are the most important values. But still, if needed, we’re ready to fight to defend that perfect society. And, of course, we do it.

The USPS “celebrates the television show Star Trek on the 50th anniversary of its premiere.”

“the silhouette of the Enterprise from above against a green background”

Denomination: Forever (equal in the value to the current First-Class Mail one-ounce price)

"This is how the Jewish Cohanim (Priests) would bless the congregation when the Temple stood in Jerusalem (between the years 530 BC and 70 AC). This gesture is still used today by the descendants of the Cohanim (normally those named Cohen, Kahane, Katz, and many other family names are direct descendants of the original family that started with Aharon). The Priestly blessing is regularly recited during the prayer service and is a very special moment of spiritual unity and peace."