Television and Stamps: Only Fools and Horses 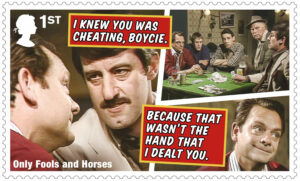 The legendary television series "Only Fools and Horses" was first broadcast on the British BBC in 1981. The series gained great popularity and millions eagerly awaited in from of their TVs the new adventures from the London's Peckham’s working-class district. Derek Delboy Trotter, his younger brother Rodney, their grandfather, Trigger, Boycie, Uncle Albert, Mickey Pearce and many others caused bursts of laughter.

On the 16th of February this year, the British Royal Mail has decided to make a special edition of postage stamps on the occasion of the 40th anniversary of the beginning of broadcasting. The limited series of postage stamps feature scenes and famous quotes from the main characters. Famous replicas from the series will be written on eight of the 12 stamps, while four main characters of the Trotter family line will be highlighted on four.

Since we believe most of us know all these famous characters, mishaps and quarrels, we worked extra hard this time to bring you 10 lesser know facts about this iconic TV show.

And may we all, this time next year, be millionaires!

Only Fools and Horses 1st Stamp (2021) A Losing Streak

So, maybe there was some real wisdom in his stories.

Also, Buster Merryfield was never an established actor. He had a long career in banking and when he was 57 years-old he took up amateur dramatics.

In 1985 he was cast for the role of Uncle Albert and instantly became an iconic TV star.

2. „Stick a pony in me pocket, I'll fetch the suitcase from the van“

Ever wondered what a „pony“ stands for here? Well, chances are you either have or you haven't but now that we ask, you have no idea! Pony is the one of most widely recognised Cockney rhyming slang terms for money and stands for £25.

Interestingly, John Sullivan not only wrote Only Fools and Horses but he also sings the opening and closing theme tunes.

Although the series is set in Peckham, majority of the filming actually took place in and around Bristol.

On the other hand, the unforgettable ‘Miami Twice’ Christmas specials from 1991. were set in what is supposedly Al Capone’s favourite suite in the Biltmore Hotel, Miami.

David Jason and Nicholas Lyndhurst had only one shot to complete the scene of the infamous chandelier gaff as the chandelier cost £6,000!

If anything happened and the chandelier fell the episode would have been lost.

Talk about stress! Thankfully they nailed it first time.

Only Fools and Horses wasn't the first name of choice for our favourite BBC sitcom.

The original working title was ‘The Readies’ which is the cockney slang term for a £50 note. Another possibility was Big Brother, which we now know is the title of the first episode.

However, he decided on Only Fools and Horses instead, a little-known phrase referencing “only fools and horses work for a living”, fitting with the Trotter’s lifestyle.

If this wasn’t enough for you to question everything you know – David Jason also wasn’t the first choice for the role of Del Boy! Jim Broadbent was the first one asked to play Del but then later became Del's arrogant nemesis DCI Roy Slater.

6. Raquel was just meant to be

During the very first episode when Del walks into the Nag's Head he says hello to a woman sitting at a table. This actress was allegedly Tessa Peake-Jones who went on to play Raquel.

But the first time Raquel actually appeared on the show was supposed to be her last!

In the Christmas Special - Dates Del signs up for a Dating Agency under the name Derek Duvel, and is set up on a date with actress Raquel Turner.

Lucky for Del, Sullivan brought her back in the episode The Jolly Boy’s Outing, and she later became Del’s wife and having a son with him named Damien.

7. There was more than one yellow van!

The famous three wheeled yellow Robin Reliant with the words Trotters Independent Traders over it is practically the 4th Trotter star in the show!

It might surprise you there were over a dozen three-wheeled Reliant Regals used during the series – so it’s more like a 4th – 15th member of the crew! Not everyone or anything can keep up with the Trotters!

8. John Sullivan based characters and stories on his family

Rodney was based on John Sullivan's older brother, and unlike David, Nicholas Lyndhurst was cast early on in the pre-production.

Also, inspiration for some of the episodes came from John Sullivan's life. For example, ”The Jolly Boys Outing” was written after  and actual annual event his sister-in-law’s father used to go to.

Completely true to the story, the iconic ring that we hardly ever see Del Boy without was quite the bargain – costing only 50p.

10. Only Fools and Horses Holds the Record For Highest UK Audience

The memorable last episode “Time On Our Hands”, in which Del Boy and Rodney Trotter finally achieve their dream and become millionaires was originally broadcast at Boxing Day (26th December). It attracted a staggering 24.3 Million viewers – and that was live TV, something era of streaming services made us all forget.

The record for the highest UK audience of a sitcom episode is not the only honour deserved by the cast and crew of Only Fools and Horses throughout its run. The show won plenty awards, including BAFTAs, National Television Awards and awards from the Royal Television Society.

Even though the episode was billed as the last ever episode of Only Fools and Horses it was followed by several other specials.

If you still feel nostalgic after watching all the reruns of this amazing show, it will cheer you up that there is The Only Fools and Horses musical, and it hit The West End.

John Sullivan’s son, Jim, completed a script for an Only Fools and Horses musical, which is currently sadly suspended due to social distancing measures, but we hope to be able to enjoy it soon!