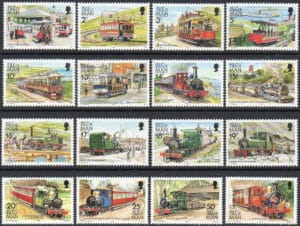 Today, trains are everywhere around us. The same stands for postage stamps. A number of stamps with train motif were issued over the years. Therefore, we’ll try to mention some important stamps with trains on them. These will be either older or valuable stamps, either stamps depicting some popular trains.

The Industrial Revolution (on Stamps) and first Trains

It all started at the beginning of the 19th century. When the British inventor, Richard Trevithick, applied the newly improved steam engine of Scotsman James Watt, to a coal mine tramway in 1804 he laid the foundation for the first railway.

Another English inventor, George Stephenson, is usually credited as the creator of the modern locomotive. An early engine, the Locomotion, made its first trip on September 25, 1825 carrying both freight and passengers. In 1829, his most famous engine, the Rocket, made its debut, winning a performance contest sponsored by the Liverpool and Manchester Railway. This engine had all the essential elements of a practical modern locomotive engine and it marked the beginning of the railway age.

Pioneers of the Industrial Revolution

And since that time, the development of trains hasn’t stopped. Nowadays, we’re far from steam engines and we’re talking about Maglev trains and hyperloop in the future.

Since both, The Industrial Revolution, and stamps started in the 19th century, it’s no wonder that we didn’t have to wait long to see the first stamp with the train as a motif.

The first postage stamp is Penny Black, issued in 1840. In 1860, the first stamp with train as a motif, had been issued in Canada (New Brunswick). While it was the first stamp depicting train, it’s not a rare stamp. Also, it had a denomination of 1c and it was used mainly for local mails and newspapers. Let’s now take a look at some interesting stamps with trains as motifs.

“Two stamps with the motif of locomotives (from the series JŽ 661 / HŽ 2061 and JŽ 642 / HŽ 2041) were printed in a circulation of 100 thousand copies per motif and were issued in a joint sheet of 6 stamps. The nominal value of the new commemorative postage stamps is HRK 6.50. Croatian Post also issued a First Day Cover (FDC). “

Let’s finish this section with one of the series I personally find to be one of the visually the most beautiful.

“The Isle of Man, for its size, has a remarkable number of different railway and tramway systems and they formed the basis of very attractive definitive stamps, first introduced in 1988. Further printings were required of certain values between 1989 and 1991 and they appeared with new imprint dates in the bottom margin of the stamps.”

We’ve seen a number of train-related stamps so far. But now let’s see few more stamps related to one of the most famous trains in the history – the Orient Express.

“From then until October 4 of that year (1883), the train ran regular trips between Paris and Vienna. That October, the route was extended to Istanbul by way of Munich, Vienna, Budapest, and Bucharest.“

The 100th Anniversary of the Orient express

“Until 1889 (when the rail line was completed) the last leg of the trip (from Varna, Bulgaria, to Istanbul) was completed by ship. The journey took 67 hours and passengers slept on the train for three nights. In 1891, the train’s official name was changed to the “Orient Express.””

While the Orient Express doesn’t operate at this moment, there are plans to relaunch it in 2025.

While trains on stamps are pretty niche topic, I guess there are many among us who love both. I know I love them, so for me they sound as a good topic to collect. You won’t find many expensive straps with a train motif, but you could find a lot of joy and history along the way.