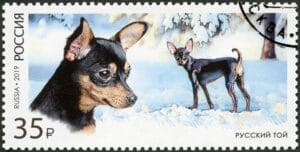 Whether you are a dog or cat person (why not be both?!) you must have heard the saying that a dog is a man's best friend, which is difficult to contradict. No matter if they are active, loyal guardians, chubby entertainers (ever seen a pug doing zoomies?) or gentle companions, dogs guarantee their owners unconditional love, slobbering kisses and endless walks in the rain.

The USPS recently issued a set of stamps honouring working dogs - German shepherd, Dutch shepherd, Belgian Malinois and Labrador retriever. Although very different in temperament what connects these breeds is helping human kind. From therapeutic tasks to the police action, all of these dog breeds are known for, with proper training, devoting their lives to serious work next to their human companion.

So, in honour of our best friends, loyal companions and dedicated workers, in this article we will address the most famous dogs - those portrayed through pop culture, for the most part film.

This is one of the most famous breeds in the world today due to the character of Lassie, created by Eric Knight in a short story published in 1938. Lassie Come Home. Lassie was first screened in 1943 in the movie Lassie Come Home with actors Roddy McDowall and Elizabeth Taylor.

The story revolves around the Turner Family - dad, stepmom, little Jennifer and teenager Matt – who leave the city for the wilds of Virginia. The move creates problems for everyone, especially Matt, who feels lost and alone in his new surroundings. Fortunately, the Turners are helped by a homeless collie who becomes part of their lives - and Matt does a lot of growing up as a result of the dog's unflinching loyalty.

“I have yet to see one completely unspoiled star, except for the animals – like Lassie.”

Lassie is one of only three animals to receive a star on the Hollywood Walk of Fame. In 2005, the Variety Show Business Journal ranked Lassie as one of the 100 all-time icons.

Rough Collie is a very intelligent and friendly dog, but requires a lot of attention and positive emotions. They are calm but know how to play well. The shepherd instinct is still strongly present. The Scottish Shepherd is very loyal to the owner and behaves protectively, he is especially careful with children. He cannot stand punishment or shouting and tends to be stubborn.

St. Bernards is a breed of dog first mentioned in the 17th century which comes from Italy and Switzerland. He appears under quite a few names out of which maybe the most interesting is Barry Dog after the most famous Bernardine known for saving over 40 lives. Perhaps his greatest glory was achieved by appearing in the series of films 'Beethoven' 1, 2, 3 and 4.

Beethoven is a family comedy film, which centres on a St. Bernard dog named after the composer Ludwig van Beethoven and is owned by the Newton family. Unfortunately, even after proving his canine credentials to mom and the kids, the heroic hound who escaped dognappers as a puppy, gets nowhere with uptight dad, George. But when a beastly veterinarian makes Beethoven the target of an unspeakable animal experiment, George becomes the only hope for saving the Newton's furriest family member.

“I love you, too. Thanks Beethoven, you saved my life but you better go home now. Mom said to stay in the back yard.”

Known as a classic example of a gentle giant, the Saint Bernard is calm, patient and sweet with adults, and especially children. However, St. Bernards like all very large dogs, must be well socialized with people and other dogs.

Perhaps the most famous dog on this list along Lassie, but certainly the least known breed is the Cairn Terrier. The Cairn Terrier is one of the oldest terrier breeds, originating in the Scottish Highlands and recognized as one of Scotland's earliest working dogs. They are usually left-pawed, which has been shown in dogs to correlate to superior performance in tasks related to scent.

Terry, a female Cairn Breeder Terrier has appeared in one of the most famous films of all time - The Wizard of Oz as a little friend of the main character Dorothy - Toto. Terry also appeared in 16 other movies.

“Toto, I've a feeling we're not in Kansas anymore.”

The Wizard of Oz is a 1939 American musical fantasy film. Widely regarded to be one of the greatest films in cinema history, it is the most commercially successful adaptation of L. Frank Baum's 1900 children's book The Wonderful Wizard of Oz.

It centres around Dorothy Gale and her dog Toto who are swept away from a farm in Kansas to a magical land of Oz in a tornado and embarks on a quest with her new friends to see the Wizard who can help her return home to Kansas and help her friends as well.

Befitting his breed, Toto was everything a terrier was designed to be – sturdy, plucky, hardy, spirited. "He stands up on his toes", is an old saying about terriers in general.

Dalmatian dog is a very old dog breed easily recognizable by its white hair with characteristic black or rusty spots. The famous spots are unique to Dalmatian dogs, no other purebred breed has these marks. The breed is named after the Croatian province, Dalmatia, which is believed to be the original place of origin of the Dalmatian dog.

Dalmatians and their special look were made popular by One Hundred and One Dalmatians, a 1961 American animated adventure film produced by Walt Disney Productions and based on the 1956 novel The Hundred and One Dalmatians by Dodie Smith. The cartoon has evolved into a franchise within which is still the most famous feature film from 1996. starring Glenn Close as Cruella de Vill, an evil high-fashion designer plots to steal Dalmatian puppies in order to make an extravagant fur coat, but instead creates an extravagant mess.

“Get down from there, and CATCH THOSE PUPPIES!”

The Dalmatian dog is a cheerful and playful dog, loyal to his family but full of energy and requires a lot of movement.

This article covered the 104 most famous movie dogs - Lassie, Beethoven, Toto and all the dalmatians. Maybe next time we'll cover all the animated man’s best friends - from Goofy to Snoopy!

At your service!
Manage Cookie Consent
This website uses cookies to improve your experience. We'll assume you're ok with this, but you can opt-out if you wish
Manage options Manage third parties Manage vendors Read more about these purposes
View preferences
{title} {title} {title}