Sputnik 1: Top 10 Things You Should Know 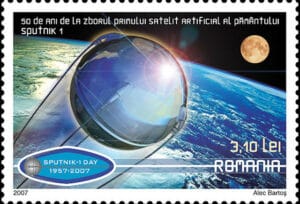 The Soviet Union launched Sputnik 1 (Спутник-1) on 4 October 1957. This was the first artificial Earth satellite and it spent 3 months in orbit. On 4 January 1958, it burned during entering Earth’s atmosphere. Today we’ll take a look at top 10 most important Sputnik 1-related facts.

Sergei Pavlovich Korolev is one of the most important scientists in the history of space exploration working as a lead Soviet rocket engineer. He was one of those brilliant minds in the history of mankind. It’s enough to say that he had almost complete Soviet space program coordinated in his head. He worked as a rocket engineer and is “responsible” for the development of R-7 Rocket, Sputnik 1, Sputnik 2 (Laika) and many other achievements. In order to avoid his possible assassination (by the United States) his name was kept in secrecy until his death in 1966. He was called simply Chief Designer (Glavny Konstruktor). I’ll use his quotes through this article.

"There is no such thing as an unsolvable problem." – Sergei Korolev

This rocket was (and still is) the working horse of the Soviet/Russian space program. It was developed to be a ballistic missile (ICMB).  And it was one, but a pretty impractical one. There were many reasons for that from the design (four strap-on boosters around the central rocket), a minimum of 7 hours to prepare it for launch, no need for such a huge rocket (nuclear warheads became smaller). On the other hand, it was perfect for a space mission.

Nikita Khrushchev (Soviet leader from 1953 to 1964) needed a weapon that would ensure the USA can’t win a nuclear war with the first strike. The decision had been made to develop an ICBM that could carry a nuclear payload. The result of that development was the R-7 rocket which could deliver a 3000 kg payload onto a target over 6400 kilometers. Satellite launch definitely was not a priority.

On the other hand, Sergei Korolev had different plans for R-7. He was aware of its capabilities and a chance he has at that moment, so he simply bypassed his superiors and went directly to Nikita. Sergei managed to convince him that launching a satellite would be of great value for the propaganda in the Soviet Union. Nikita agreed and the stage was set.

"Do you know what ‘Sputnik’ means in Russian? ‘Travelling companion’. I looked it up in a dictionary not long ago. Kind of a strange coincidence if you think about it. I wonder why the Russians gave their satellite that strange name. It’s just a poor little lump of metal, spinning around the Earth." - Haruki Murakami

The original plan was to launch a much larger satellite, equipped with a bunch of instruments, to the orbit. The problem was the slow development of that satellite. That would delay the launch and that increased the risk that the project could be abandoned (politics and/or military) or that the United States could do go first and win the race. Therefore, the simple satellite had been developed.

Sputnik 1, was 53 cm in diameter and had 83.6 kg. It was a metal sphere with 4 antennas, radio transmitter, and 3 batteries.  The transmitter transmitted “beeps” on two different frequencies.

The 5th Anniversary of Launching of Sputnik 1

Almost everything related to this project was hasty and so was the construction of Sputnik 1. There were no formal drawings of the design. Technicians build it accordingly verbal instructions and sketches.  And engineers also went with ideas along the way.

It was a space mission, but a little bit of propaganda can’t hurt as well. Therefore, the metal sphere was properly polished to look like a bright silver star. The final stage of the R-7 rocket, the one that also went to orbit, was polished properly for the same reason.

Everything was prepared to launch that was scheduled for October 6, from the what is today known as Baikonur Cosmodrome. Still, the launch happened 2 days before. Korolev was informed that the USA will launch soon so he decided to go earlier. The launch itself was almost a complete failure because the rocket had a problem with Block G booster’s main engine. That causes problems with the stability of the rocket a few seconds after launch. Fortunately, that was compensated and the launch was successful.

"I closed my eyes and listened carefully for the descendants of Sputnik, even now circling the earth, gravity their only tie to the planet. Lonely metal souls in the unimpeded darkness of space, they meet, pass each other, and part, never to meet again. No words passing between them. No promises to keep." - Haruki Murakami

The 50th Anniversary of Launching of Sputnik 1

The first signal from Sputnik had been received almost an hour after launch. It orbited the Earth every 98 minutes, completed 1440 orbits and traveled 70 million kilometers. And also flew over the USA 7 times a day. The battery lasted for 23 days during which “beep” could be heard around the World. 3 months after launch, it burned while entering Earth’s atmosphere.

"The Soviet Union has become the seacoast of the universe." – Sergei Korolev

"The way to the stars is open." – Sergei Korolev

"The first man-made satellite to orbit the earth was named Sputnik. The first living creature in space was Laika. The first rocket to the Moon carried a red flag. The first photograph of the far side of the Moon was made with a Soviet camera. If a man orbits the earth this year his name will be Ivan." – John F. Kennedy

#10 And few more words from Korolev

"The further conquest of space will make it possible, for example, to create systems of satellites making daily revolutions around our planet at an altitude of some 40,000 kilometers, and to assure universal communications and the relaying of radio and television transmissions. Such an arrangement might prove more useful, economically, than the construction of radio-relay systems over the whole surface of the earth. The great accuracy of movement of these satellites will provide a reliable basis for solving navigational problems." – Sergei Korolev

"In order for the United States to do the right things for the long term, it appears to be helpful for us to have the prospect of humiliation. Sputnik helped us fund good science - really good science: the semiconductor came out of it." - Bill Gates