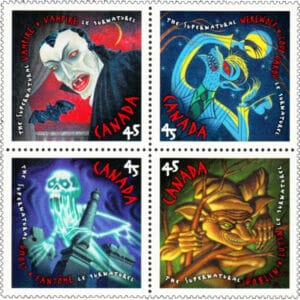 Are you ready to get scared? Like, Halloween scared. By just taking a look at the stamps. If that is the case, I would definitely recommend reading this and the upcoming article.

I guess we all know what Halloween is. But let’s remind us with some basic details we should know. Halloween takes place on 31 October, and is very popular in many countries and it’s maybe the most popular in the USA, Canada, Australia, New Zealand and Ireland.

It originates from ancient Celtic harvest festivals and comes the day before the feast of All Saint’s Day (Western Christian) and therefore some believers look at it as something pagan or evil.  I guess that most people today look at it as on the day when they can “play” with pumpkins and make pranks and jokes or try to scare somebody.

With that positive attitude, I’ll also try to scare you with few stamps today. So, prepare yourself, especially if you’re a person that could easily get scared.

The Legend of Sleepy Hollow (USA)

Few countries issued Halloween stamps, and today we’ll see a few of them, all issued either in the USA or Canada. Both countries use their dollar as currency with 1 dollar = 100 cents.

The Legend of Sleepy Hollow is one of the very first fiction stories in the USA. It was written by Washington Irving and published in 1820. "The plot follows police constable Ichabod Crane (Depp) sent from New York City to investigate a series of murders in the village of Sleepy Hollow by a mysterious Headless Horseman." The motif on the stamp represents the Headless Horseman pursuing Ichabod Crane. And all of that just for 10 cents. In 1974.

This sheet is not so directly related to Halloween, but it’s still pretty scary enough. On October 1, 1997, Canada issued these stamps to commemorate the 100th anniversary of the Bram Stoker’s Dracula.

As you could expect, Bram Stoker’s novel Dracula dates back in 1897, and in 1992 Francis Ford Coppola directed and produced a movie called simply – Dracula. In case you’ve missed, maybe following actors will be a motif for you to see the movie - Gary Oldman (as Dracula), Winona Ryder, Anthony Hopkins, Keanu Reeves.

It introduces 4 scary creatures to us – a vampire, a werewolf, a ghost and a goblin.

And what is Halloween without jack-o’-lanterns. In 2016, the USPS finally realized that and issued the first official Halloween series ever. The motif on each stamp is jack-o’-lantern. Stamps are Forever-stamps, meaning that you can buy them at the current first-class postage rate and use them whenever you like, no matter the price of the first-class postage at that time.

The jack-o’-lanterns as a tradition were bought to USA by Irish immigrants. "Jack-o’-lanterns were also a way of protecting one's home against the undead. Superstitious people used them specifically to ward off vampires. They thought this because it was said that the jack-o’-lantern's light was a way of identifying vampires who, once their identity was known, would give up their hunt for you."

But, before we end for today, let’s say a few more words about Jack. Stingy Jack is the character from Irish myth. Besides being stingy, Jack is also clever, so he managed to trick the Devil few times. He used the silver cross and the sign of the cross to blackmail the devil and get free stuff and protect his soul from being sent to Hell. Unluckily for him, when he died, he was also not a God’s choice. God hasn’t allowed him into Haven and Devil also closed the door of the Hell for him. Would you risk again with such a guy? The devil gave Jack a burning coal which jack placed into the carved-out turnip. Since then, Jack is wandering around the Earth. And therefore, jack-o’-lanterns.

Today we were very short. Be sure to check out our next article. We’ll see much more scary stamps than we did today.