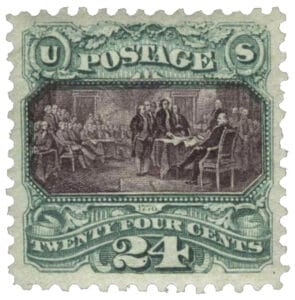 Independence Day or Fourth of July, along with Christmas, Thanksgiving, Easter, Mother’s Day and Father’s Day is one of the most important federal holidays in the United States of America. When I think of it, first what comes to my mind is the smell of a barbecue, fireworks and of course The Stars and Stripes and the sounds of “America the Beautiful” in the background. Let’s not forget Will Smith and well-known sci-fi blockbuster. But what about stamps related to the 4th of July?

4th of July 1776 is probably the most important date in the history of the USA. Two days before, on the 2nd of July 1776, the Second Continental Congress, composed of the delegates from the Thirteen Colonies - Province of New Hampshire, Province of Massachusetts Bay, Colony of Rhode Island and Providence Plantations, Connecticut Colony (New England Colonies); Province of New York, Province of New Jersey, Province of Pennsylvania, Delaware Colony (Middle Colonies); Province of Maryland, Colony and Dominion of Virginia, Province of North Carolina, Province of South Carolina, Province of Georgia (Southern Colonies) – voted to approve the resolution of independence from the Great Britain rule. On the 4th of July 1776, Congress, after debate and revision approved the Declaration of Independence. It’s worth mentioning that the text of a declaration was prepared by the Committee of Five, with Thomas Jefferson who was a principal author of the Declaration. The other four Committee members were: John Adams, Benjamin Franklin, Roger Sherman, and Robert Livingston.

The first stamp that was related to Independence Day was issued in 1869, almost 93 years after the Declaration. 1869 is a very important year in the U.S. stamp design history. This was the first year when some other motives than portraits of national leaders were used on stamps. Also, this was the first year when stamps were printed in two colors. This complicated a printing process because stamps should go through the press twice, first for the central motive and once more for the frame. This would sometimes lead to errors when the central motive and the frame were inverted, compared to the original design. Such errors led to some of the rarest and therefore most valuable stamps in history.

The central motif on the stamp was the signing of the Declaration of Independence and included 42 figures with the 6 most important on the right side of the stamp. Out of the six men around the table, five standing were members of the committee that drafted the Declaration, from left to right: John Adams, Roger Sherman, Robert Livingston, Thomas Jefferson, and Benjamin Franklin. Thomas Jefferson is presenting the draft to the President of the Continental Congress, John Hancock – he’s sitting on the right. The motive came from John Trumbull’s painting “Declaration of Independence” with James Smillie engraves that motive on this stamp masterpiece.

The stamp was printed by a National Bank Note Company with around 240.000 issued. 7th April 1869 is considered as the date of the first usage. Two colors that were used are violet and green. Stamp denomination is 24 cents, dimensions are 9 ½ mm x 9 mm and the perforation is 12.

For the second stamp related to Independence Day, we had to wait for almost 60 years. The 1926’s, 2 cents stamp was issued to commemorate the 1926 Sesqui-Centennial International Exposition, which was held in Philadelphia to celebrate the 150th anniversary of signing the Declaration of Independence.

"As Mankind becomes more liberal, they will be more apt to allow that all those who conduct themselves as worthy members of the community are equally entitled to the protections of civil government. I hope ever to see America among the foremost nations of justice and liberality." – George Washington

One of the highlights of the expositions was the replica of the Liberty Bell. The Liberty Bell has a special part in USA history and is closely related to the Declaration of Independence. It was commissioned in 1752 and installed in Philadelphia.  On the 8th of June, 1776, it ringed together with other bells to mark the reading of the Declaration.

This bell is the central motif of the stamp. Almost 308 million of these, 2 cents, red beauties with perforation 11 were issued.

"Independence Day: freedom has its life in the hearts, the actions, the spirit of men and so it must be daily earned and refreshed – else like a flower cut from its life-giving roots, it will wither and die.” – Dwight D. Eisenhower

In 1959 and 1960 two more stamps related to the 4th of July were issued. Both of them had the same denomination of 4 cents and a similar motif. Also, both of them have 11 perforations.

Around 209 million of these stamps were issued.

I hope that you’ve enjoyed today’s article and that it covered all you would expect. Light up your grill, enjoy the fireworks, and have the best 4th of July!

"Happy 4th of July! Drink until you see stars… and stripes!"