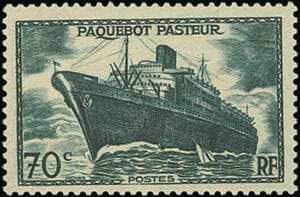 France – land best known for good food, fine art, fashion, and very rich and turbulent history. Due to its interesting past, France presents very diverse and beautiful philatelic material including some highly valuable issues. Their value is contributed by the fact that many of them are engraved, making them miniature works of art. With the first stamp being issued in 1849., and many collectible pieces issued all throughout the 19th, 20th, and now also 21st century, this area of collecting is one of the busiest in the world. Today, we present you the rarest and most valuable French stamps so it might be wise to check your collections – you might find a true gem!

10c postage due stamp is one the most interesting French stamps being the first stamp ever issued that did not prepay for the delivery of the mail. Postage due is the term used for mail sent with insufficient postage. A postage due stamp is a stamp added to an underpaid piece of mail to indicate the extra postage due – paid by the receiver and not the sender. Designed solely for functional purposes, the stamp was plain with large numerals indicating the amount to be paid.

Still, although maybe not the most beautiful of the bunch, being this special it is no wonder it got auctioned for $23,100 at Cherrystone auction in 2006.

A great 20th century rarity printed in a handsome dark blue-green, but otherwise very unassuming is a French stamp from 1941 which commemorates the SS Pasteur, an ocean liner pressed into service as a troop ship that had been commissioned the previous year.

It was designed by Albert Decaris and though printed with a 70-centime denomination in the lower left corner, the horizontal stamp was issued only as a surcharged semipostal: a red overprint applied two short horizontal lines across the 70c inscription, and added: “1f” (franc) in the upper left corner and “+1f” in the upper right corner.

This being said, it might not come as a surprise that the valuable piece is the one with the red surcharge missing. There are only 8 of these today and one was recently sold for $30,000 at Daniel F. Kelleher Auctions in 2017.

10c Napoleon III stamp, a dark bister on yellow is a very rare stamp, almost never offered in sound condition, according to Robert A Siegel in whose auction gallery this stamp was auctioned for a whopping $40,000 in 2013.

Napoleon III, the nephew of Napoleon I, was the first president of France and the last French monarch. First elected president of the French Second Republic in 1848, he seized power by force in 1851 when he could not constitutionally be re-elected and became the emperor of the French. He founded the Second French Empire and ruled for almost 20 years.

Around that time his portrait replaced the one of Ceres on French stamps with the basic design staying the same including the REPUB FRANC inscription.

In philately, tête-bêche (French for "head-to-tail", lit. "head-to-head") is a joined pair of stamps in which one is upside-down in relation to the other, produced intentionally or accidentally.

One tete – beche cliché occurred at a position 131 of the second plate of the blue 25 centimes Ceres stamp issued in 1850. The second plate was not used for long, still many used tete – beche pairs have survived – with only two unused examples known and one in the Ferrary collection.

Interestingly, since position 131 is on the left margin of the sheet, all horizontal tête-bêche pairs of this value must be “face-to-face”, and any “back-to-back” pairs are forgeries.

The stamp is a part of the Ceres series, the first postage stamp series of France, issued in 6 different values from 1849 to 1850 as a representation of the French Republic. The series bore the effigy of Ceres, goddess of growing plants in Roman mythology. Jacques-Jean Barre did the initial drawing and gravure. After the fall of Napoleon III the drawing was used again by necessity. Two new Ceres series were issued in the 1930s and 1940s.

Considered one of the greatest French mint tete – beche rarities this piece was sold for $72,500 by Robert A. Siegel in 2010.

Another piece of the Ceres series, the 1Fr dull – orange-red was issued in January and withdrawn from service in December 1849 because its color was too close to the soon-to-be issued orange 40 centimes stamp. Two printing plates were prepared for this denomination, the first of which contained a single tête-bêche cliché at position 35, and the second of which was normal.

It is believed that only the first of the two printing plates were used to print just 250 thousand of the vermillon stamps in the first week of 1849, and 122 thousand of those were returned to be destroyed in December 1849. Consequently, only 850 tête-bêche pairs were in circulation, ranking them among the rarest of French errors – making it highly valuable.

10c bister on yellowish tete – beche block contains nine unused Ceres issues with the center stamp upside down in comparison to others. Since most tete – beche multiples are either pairs or strips of three this block is an exceptional philatelic item with the number of stamps making it worth a fortune – more precisely, $90,000 for how much it got sold by Robert A. Siegel in 2010.

1Fr Light carmine od yellowish tete – beche pair, coming from a position 35 of the first plate, is a spectacular issue widely regarded as one of the greatest 1849-50 Ceres issue tete-beche rarities extant, with only four unused examples recorded.

It has graced several of the finest collections of classic French stamps ever formed, including the famous Ferrary collection. This spectacular pair was sold for $190,000 by Robert A. Siegel in 2010.

As you can see, most of the most valuable French stamps are not perfect, artistically special stamps, but the so-called tete – beche stamps, or stamps with the error. Some errors are accidental, some intentional, and some are also rare, but in the world of stamps, these special errors usually come with a high collector’s value and price to match. So maybe one of your grandfather's old, weird block hides a secret and a price to match!