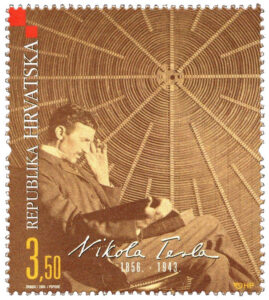 Nikola Tesla was born on July 10, 1856, in Smiljan, Austrian Empire, and died on January 7, 1943, in New York, United States. Without a doubt, he was one of the greatest minds in the history of Mankind.

A brief history of Smiljan – and the/no answer to the question “Was he American, Croat or Serb?”

While this is a pretty irrelevant question, having in mind all his achievements, all three mentioned nations like to take Nikola for themselves. So let’s look at a few facts.

Nikola was born in Smiljan, a village 7 kilometers northwest of Gospić, a town in Lika county. At the moment he was born, Smiljan was a part of an Austrian Empire (1804-1867) which was later transformed into Austria-Hungary (1867-1918). After the end of WWI and the dissolution of Austria-Hungary, Simljan became a part of the State of Slovenes, Croats, and Serbs (1918) which later joined with the Kingdom of Serbia into the Kingdom of Serbs, Croats and Slovenes (1918 – 1929). The Kingdom of SCS changed its’ official name to the Kingdom of Yugoslavia (1929-1941) in 1929 and used it until 1941 when it was dissolved. From 1941 to 1945, Simljan was a part of the Independent State of Croatia. On November 29, 1943, Democratic Federal Yugoslavia was formed (during WWII) and it will later change names to the Federal People's Republic of Yugoslavia (1945 – 1963) and later to Socialist Federal Republic of Yugoslavia (1963 – 1992). During the wars in Yugoslavia, it was part of Croatia (1991 – today) and the Republic of Serbian Krajina (1991 – 1995). Few are overlapping to where Smiljan belonged to because of the wars that were ongoing at the moment and states being or not being internationally recognized.

Nikola was born as the fourth of five children (sisters Mika, Angelina and Marica, and brother Dane) in the family of Milutin and Đuka. While his father Milutin was an Eastern Orthodox priest, his mother Đuka never received a formal education. Still, she was a remarkable woman with an eidetic memory. That enabled her to remember Serbian epic poems and she also had a talent for making mechanical crafts.

Nikola was educated in German because Lika was a part of an Austrian frontier. He completed primary school in Smiljan and Gospić, and later middle school in Karlovac. During his middle school education, he met with electricity. His physics professor used it in experiments of classes and that probably directed his whole life (just remember that when you’re teaching, maybe you have some new Nikola sitting in classes). In 1875 he started to study at Austrian Polytechnic in Graz, Austria. He was a remarkable student until he started gambling and never finished his studies.

Later he had few employments related to telephones and electricity of which the most important was the one in the Continental Edison Company in Paris. In June 1884 he emigrated to the USA and stayed there until his death.

After all of this, it’s really hard to say to whom Nikola belongs to, so let’s use his words:

Although you’ll find that Nikola had no hobbies, he loved gambling and playing cards, especially during his studies and playing billiards later.

His sex life was also one of these irrelevant things people usually asked about him – was he gay or not. If he was gay, it’s hard he would even go out with that statement. Still, there is a greater chance he was completely asexual because he simply didn’t have any time for relationships. This was his answer to the question about marriage:

He spent a lot of the time in hotel rooms with Room 3327 in the Hotel New Yorker being the most famous one. He spent 10 years there (actually in rooms number 3327 and 3328), from 1933 to 1943 and he died in Room 3327. That was also the place where his scientific papers (including the Death Ray) were kept in a safe. Papers disappeared after his death, never to be found again.

It’s hard to say which one of his achievements was the most important, so I’ll mention these well-known here.

AC / DC – While Edison's work and research were based on the DC (direct current), Tesla was focused on AC (alternate current). He proved that AC is less costly and safer and the result of his work is today everywhere around us. On the other hand, Edison electrocuted animals using AC to prove how dangerous it is, so Edison gave us an electric chair ?

Remote Control - In 1898, at the Electrical Exhibition, in New York's Madison Square Garden, Tesla used radio-waves to navigate a 4-foot-long miniature ship remotely. He controlled propeller, rudder, and scaled-down running lights. Needless to say, it looked like magic these days.

Tesla’s AC Induction Motor is sometimes placed into the category of the 10 greatest discoveries of all times. If you ask yourself “why”, just look around yourself. These days, we can also look at car engines.

The radio – Usually Guglielmo Marconi is credited as the inventor of the radio and that was the case until 1943 when the Supreme Court overturned Marconi’s patent as it was proven Tesla invented the radio a few years earlier. Marconi initially got the patent because, probably, he had stronger financial backers at that time.

Some other (claimed) inventions Tesla is related to are: the Death Ray, robotics, X-rays, wireless energy transfer, limitless free energy, and many others. And of course, all his work on the Wardenclyffe Tower. Some of them were concepts, some lost during the time. We’ll probably never know if some of them truly ever existed, were they hidden in archives for being too powerful or too much on the way of the current economic system.

The 125th Anniversary of the Patent of Tesla’s Transformer

« Philately and History: WWI on Stamps
Nature and Philately: Dogs on Stamps – Europe 2020 »