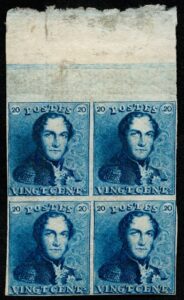 We’ve already talked about the rarest stamps from Germany, France, the UK, and Ireland. Today we’ll take a look at the rarest and most valuable Belgium stamps. And probably learn more than we expected about epaulettes and Anatoly Karpov and his collection.

Before starting writing this article, I wasn’t aware how important King Leopold I, Anatoly Karpov and David Feldman would really be for the whole story. And epaulettes too. Since they are so important, I’ll mention them along the way as we take a look at these beautiful stamps.

King Leopold I was the first King of the Belgians. His reign lasted from 21 July 1831 until 10 December 1865. For us it’s important that he was the king at the time Belgium issued first stamps, and we’ll see him today on 3 out of 5 mentioned stamp designs. All of them were a part of the Anatoly Karpov’s collection and sold at David Feldman auctions in 2011 and 2012.

On these stamps we can see him wearing epaulettes. This was something he was famous for. And this brings us to the name of the first issue of Belgium postal adhesives, known as the 1849 Epaulettes issue.

Since we’re already talking about everything related to Epaulettes 1849, in this section I’ll present two more stamps of this design. These two are also the two most valuable Belgium stamps we’ll see today.

Anatoly Karpov is a chess grandmaster, but also a stamp collector. As stated in his biography here: “He has assembled important stamp collections of Imperial Russia, Olympic Games from 1897, and also Belgium and Belgium Congo stamps and postal history covering mail from 1742 – 1980, much of the latter early material was sold by David Feldman International Auctioneers during three auction sales between December 2011 and 2012.”

Here we can see more details about Epaulettes 1849.

The name David Feldman had been mentioned a few times so far in this article. I guess that a large number of philatelists know about this stamp auction house and the David Feldman. For those who meet with this info for the first time, this is what Wikipedia says about him: “David Feldman BA, BBS, RDP(I) is a professional philatelist, auctioneer and author. He held his first stamp auction in 1967. Feldman is Honorary Chairman of David Feldman SA, a Geneva-based auction company, through which he attained record prices for some of the world’s most famous postage stamps”

The last 2 stamps we’ll see today, are #3 and #4 on the list of the most valuable Belgium stamps. And they are not Epaulettes 1849. Both of them are inverts, with the first one originating from Belgium and the second coming from the Independent State of the Congo (Belgian Congo).

The Inverted Dendermonde is probably the most famous Belgian stamp. The motif on this stamp is the town hall in the city of Dendermonde. As it’s usually the case with inverts, they were not planned. We can assume that the cause of this error was the same as was the case with the Inverted Jenny. “The whole idea was to print one color on one machine and then insert the paper and print the motif on the next machine.” Somewhere along the way, somebody turned the paper on the wrong side, and we got these valuable stamps.

It’s believed that today only 15 unused and 2 used copies exist. As we can read here, this stamp was not only valuable, but also led to the murder: “In 1942 a stampdealer from Brussels , who had two copies of the stamp, was murdered. The murderer and the two stamps were never found.”

The last stamp we’ll mention today is 1894 10f Belgian Congo centre invert. We can assume that the cause of this error was the same as in the case of The Inverted Dendermonde.

It’s believed that only 5 of these beauties are still in circulation these days, and they worth a little fortune.

Today we’ve not only seen the top 5 most valuable Belgium stamps, but we also learned that Anatoly Karpov was one of the greatest philatelists of the Twenty-first century. We’ve also mentioned David Feldman and his auction house. I guess now we’re ready for the next article covering the topic of the most valuable stamps.

And while you wait for the new articles, feel free to check previous articles from this series: