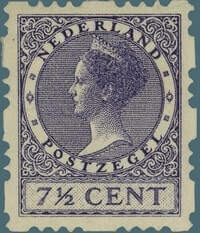 The history of PostNL dates back to 18th century, when the Dutch States Post had been founded in 1752, and the first Postal Act was confirmed in 1807. Still, we had to wait until 1852 for the first Dutch postal stamp.

The year 1852 falls inside the ruling period (17 March 1849 – 23 November 1890) of King Willem III. Therefore, it’s not a surprise that first stamps had a bust of King Willem III as a motif. Before moving to stamps, I’ll add a short history note regarding King Willem III. He was pretty, to say it politely, hard to handle. New York Times described him as “the greatest debauchee of the age”. Most of his temper calmed after he married Emma of Waldeck and Pyrmont. This was his second marriage, after his previous wife, Queen Sophie of Württemberg passed away.

On the picture below you can see the first three Dutch stamps, with the leftmost (5 cents, light steel blue) being the first one.

Besides that one, the middle one with the denomination of 10 cents (dark carmine) is interesting to us, because this one holds the 5th place of the most valuable Dutch stamps with an estimated value of $2.900. That was the price it was sold for at Hammer auction in May 2014.

One more interesting fact we should notice here is that these stamps were inscribed with only "POST ZEGEL" ("POSTAGE STAMP"), without the country name.

Queen Wilhelmina was a daughter of King William III and Queen Emma. After the death of her father in 1890, Queen Emma became a regent for her daughter, until she turned 18 in 1898. Her reign lasted from 23 November 1890 to 4 September 1948, so it happened that she was on the throne during both world wars.

The 1927 stamp with bust of Queen Wilhelmina is on the 4th place of our list. For this stamp we can notice syncopated perforation Type D.

The next stamp, and the 3rd most expensive is the 1c lilac telegraph stamp. This stamp was sold for $3,168 in October 2010 at Corinphila auction. Some estimates of its’ value go even up to 40.000 Euro. Still, on thing is interesting here, and that is the fact that this stamp is actually a forgery.

It’s not a surprise that the top 2 on our list also have King Willem III and Queen Wilhelmina as motifs. Their reign together coves almost 100 years of Dutch history, and these are almost complete first 100 years of Dutch philatelist history. And yes, most stamp designs of that era, not only in Netherlands, had busts of rulers as motifs.

We’re moving to the number 2 on our list. Once more we can see King William III.

The 6 stamps from this series are interesting not only because of the history, but also of the fact that this was the first time that Dutch stamps had the name of the country inscribed.

Although it’s hard to notice Queen Wilhelmina behind the overprint, she’s actually on the stamp. The original 17 ½ cents stamp god 15 cents overprint. This stamp in really good condition is estimated at $4.750.

Today we’ve seen top 5 most valuable Dutch stamps. Although they are not as valuable as stamps from some previously mentioned countries, they still have pretty fair value. And they also have a lot of history to tell – at least the 100 years of Dutch history.

While you wait for the new articles, feel free to check previous articles from this series: