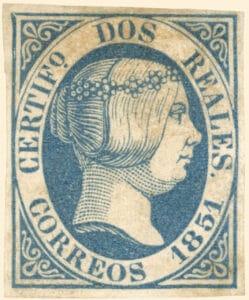 We’ve already talked about the rarest stamps from Germany, France, the UK, Ireland, and Belgium, the Netherlands, Australia, and Canada. Today we’ll take a look at the rarest and most valuable Spanish stamps.

Before we move to stamps, it’s important that we understand the history of Spanish currency. While the first constitution of Spain, the Constitution of Cadiz, dates back only to 1812, the history of Spain goes way beyond that. The first traces of city/state could be found even in XII century BCE, when the city of Tartessos, on the south of the Iberian Peninsula, is mentioned for the first time.

After that Spain was under Carthage (Carthaginian Hispania), Rome (Roman Hispania), Visigoths, Umayyad Caliphate, Trastámara Dynasty, Habsburg Dynasty, Bourbon Dynasty. Needles to say that this mix of ruling dynasties, where Spain often was a province of another empire, produced a mixed and specific culture.

So, we’re back in 1812, and the Constitution of Cadiz. At the time it was an extremely modern document, defining “national sovereignty, separation of powers, freedom of the press, free enterprise, abolished corporate privileges (fueros), and established a constitutional monarchy with a parliamentary system.” (Wikipedia)

Taking all of this historical background into account, it’s not a wonder that Spanish currency also went through numerous changes during the time. In 10th century, we had Spanish dinero, Maravedi was actual from 11th to 14th century, Spanish Real from mid-14th century to 1864. From 1535/1537 until 1849 Gold escudo had been used. Silver escudo from 1864 to 1869, Peseta from 1869 to 2022, and Euro nowadays.

This brings us to the first stamp on our list, and the 5th most valuable. It dates back to 1853, and has a denomination of 3 Spanish cuarto.

“The "cuarto" was an obsolete coin dating back to the days when the main currency unit was the real (up to 1869); the real was divided into 34 maravedis, and the cuarto was not a quarter of a real but 4 maravedis, so there were 8-1/2 cuartos in a real (seriously). A real itself was equivalent to a quarter of a peseta.” - cuartos, reales etc.

"The period of Isabella’s personal rule (1843–68) was characterized by political unrest and a series of uprisings. Her government was dominated by military politicians, most notably Gen. Ramón María Narváez and the somewhat more liberal Gen. Leopoldo O’Donnell. Liberal opposition to the regime’s authoritarianism became increasingly directed at the queen. Scandalous reports on the private conduct of Isabella, who lived apart from her husband, Francisco de Asís de Borbón, as well as her arbitrary political interference, further damaged the monarchical cause. The abortive uprising of 1866, and the deaths of O’Donnell (1867) and Narváez (1868), weakened her position further. In the autumn of 1868 a successful revolution drove her into exile. Isabella settled in Paris, where in 1870 she abdicated in favour of her eldest surviving son, the future Alfonso XII (1874–85). She returned to Spain for a time after Alfonso’s accession but was unsuccessful in influencing political affairs." - https://www.britannica.com/biography/Isabella-II-queen-of-Spain

For philately her rule is also very important.

“In 1843, the Spanish provisional government under General Narváez began to study the British experiment of prepaid postage labels. Finding the British printers Perkins, Bacon and Petch too pricey, they decided to establish their own printer, and on 24 October 1849 Queen Isabella II decreed that Spain would use postage stamps effective 1 January 1850. In December postage rates and regulations were promulgated and the first stamps of Spain were issued on 1 January 1850. There were five stamps in the set with denominations from six cuartos to ten reales in different colors with all of them depicting Queen Isabella II. They were printed lithographically and issued imperforate. Both thin and thick papers were used, but neither had any watermark.

The 1850 stamps were replaced on 1 January 1851 with a new set of six stamps which added the two reales denomination in red, and changed the five reales from red to rose in color. These 1851 stamps had a new portrait of Queen Isabella II, were typographed on thin paper, again without watermark, and issued imperforate.” - https://en.wikipedia.org/wiki/Postage_stamps_and_postal_history_of_Spain

You can see those two these stamps issued in 1851 and 1852, as 4th and 3rd most valuable Spanish stamp in our list.

Another important part of Spanish history was the period of The Spanish Republic (Second Spanish Republic) lasting from 14 April 1931 until 1 April 1939. The Republic had been established after the deposition of King Alfonso XIII and lasted until the (General Francisco Franco) Nationalists victory in 1939.

The 2 stamps above were issued in 1939, by The Spanish Republic. During the civil war, both sides issued their stamps. You can see some of stamps issued during the Spanish Civil War here.

The first place in our list of the rarest and most valuable Spanish stamps is reserved for one more Queen Isabella II stamp dating back from 1851. You can easily notice that the value of this stamp is much higher than the value of other 4 stamps in our list. It’s believed that only 3 of these stamps exist today. One of them is also a part of the Tapling Collection (Thomas Keay Tapling - one of the original "Fathers of Philately").

Today we’ve seen some of the rarest and most valuable Spanish stamps. While you wait for the new articles, feel free to check previous articles from this series:
UK - Rarest Stamps: Most Valuable UK Stamps