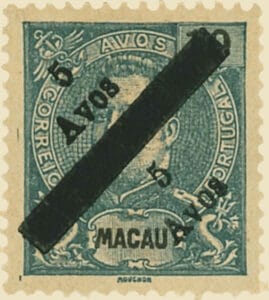 We’ve already talked about the rarest stamps from Germany, France, the UK, Ireland, and Belgium, the Netherlands, Australia, Canada, and Spain. Today we’ll take a look at the rarest and most valuable Portuguese stamps.

Portugal is a country with a really rich history. It would be hard to put only the most important parts of that history in a few books, so putting some of these parts in 1 article alone is a pretty hard thing to do. For the purpose of this article, it’s important that Portugal is one of the oldest countries in Europe. Portugal was officially founded as a kingdom in 1143, although we could track its’ history down to 868 when The (First) County of Portugal had been established.

Note: Regarding Europe, Bulgaria is generally accepted as the oldest country (founded in 681). France is accepted to be founded in 843, The United Kingdom in 927, and Denmark in 965.

During the long history half of the "New World" once belonged to Portugal, so it’s no wonder that Portuguese is the official language of nine countries (Angola, Brazil, Cabo Verde, Equatorial Guinea, Guinea-Bissau, Mozambique, Portugal, Sao Tome and Principe and Timor-Leste). The total number of speakers of Portuguese is more than 250 million, but we have to take into consideration that Brazil alone has a population of 212 million.

Regarding the first stamp on our list, it’s one dating back to 1952, and commemorating the 3rd anniversary of Portugal joining the NATO Alliance.

Let’s now move to more valuable stamps with motifs of kings and queens of Portugal.

King Pedro V ruled Portugal from 15 November 1853 to 11 November 1861. Therefore, he was the king of Portugal at the time Portugal issued first stamps.

Note: Portugal issued its’ first stamp on 1 July 1853. The motif on this stamp was a bust of Queen Maria II. We’ll see this stamp in just a second.

Therefore, Pedro V, was the 2nd ruler of the Portugal after the first stamp had been issued.

As, we’ve already mentioned, Peter’s mother, Queen Maria II, ruled Portugal until 15 November 1853. She was on the throne at the moment Portugal issued first stamps, so it’s no wonder her bust is on the stamp depicted below.

King Luis I & King Carlos I

King Luis ruled the Portugal from 11 November 1861 to 19 October 1889. So, it’s not a wonder we can see his bust on the 1867 yellow “King Luiz” stamp. What makes this stamp even more valuable is the face that we have “Azores” overprint. This version of the stamp had been used by Azores, and Azores used mostly Portuguese stamps with overprints.

Note: Azores Islands became part of Portugal when Gonzalo Velho Cabral arrived at Santa Maria and took possession of the island in the name of the King of Portugal. That happened in 1432, and islands were uninhabited until 1439.

Note: Besides Azores, Portugal had a number of colonies, with maybe most important being Brazil, Angola, São Tomé and Principe, and Portuguese Macao.

Note: After a series of clashes with Ming Chinese, China allowed Portugal to establish a permanent settlement – Macau. Today Macau is famous for gambling, holding the title “the Las Vegas of the East”.

The overprint on this stamp shows that the stamp had been used in Portuguese Macau. Macau is today a part of China, and Portugal officially handed over Macau to China on 20 December 1999.

Today we’ve seen some of the rarest and most valuable Portuguese stamps. While you wait for the new articles, feel free to check previous articles from this series:

« Rarest Stamps: Most Valuable Spanish Stamps
The Red Cross on Stamps: A Tale of Henry Dunant and Clara Barton »