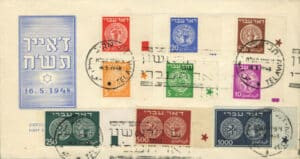 We’ve already talked about the rarest stamps from Germany, France, the UK, Ireland, and Belgium, the Netherlands, Australia, Canada, Spain, and Portugal. Today we’ll take a look at the rarest and most valuable stamps of Israel.

The history of Jewish people and Judaism in general is simply too vast for one article. It’s worth to mention the following:

“Judaism is the world’s oldest monotheistic religion, dating back nearly 4,000 years. Followers of Judaism believe in one God who revealed himself through ancient prophets. The history of Judaism is essential to understanding the Jewish faith, which has a rich heritage of law, culture and tradition.” (https://www.history.com/topics/religion/judaism)

"For the Redemption of Zion"

Unless you’ve lived under some rock for past almost 80 years, you’re aware of the conflict ongoing between Jews and Arabs on the territory of Palestine (Israel state and Palestinian territories). And the solution for this conflict is nowhere to be see soon. The borders are still not completely defined and recognized by both sides, there was a lot of casualties and suffering on both sides, clashes, in smaller intensity are still ongoing. We can only hope that during our lifetime this will be over.

If I’ll need to wrap it up:

“The nation of Israel is the world’s first Jewish state in two millennia. It represents for Jews the restoration of their homeland after the centuries-long Diaspora that followed the demise of the Herodian kingdom in the 1st century CE. As such, it remains the focus of widespread Jewish immigration.” (https://www.britannica.com/place/Israel/Immigration-and-conflict)

So, after centuries without a state, on May 14, 1948, the State of Israel had been declared. A lot of events before declaring independence and after that led to the conflict we have today. The main problem was that the main intention behind establishing Israel was not to help Jews, but good old, power struggle between the superpowers of that time (Ottoman Empire, British Empire, USSR, and USA). Every superpower looked for a way they could use this new state as their puppet, and nobody actually cared about real problems people who were settled there, or who previously lived there, experienced.

We can’t do much to solve that situation, but we can take a look at some of the most valuable stamps from Israel. Having in mind that Israel was formed in such circumstances and had been attacked almost instantly, at that time, philately and stamps were not so much in the focus.

The stamps above “…represent the last three stamps of the first series of postage stamps of this state. This series was called Doar Ivry ("Jewish Post"), since the state did not have its official name at that time. All stamps of the series depict old Jewish coins. The sold Israeli stamps have a face value of 250, 500, and 1000 mills (which is a small change coin - 1/1000 of a lyre). The presence of coupons with the inscription in Hebrew gives value to these copies. These three stamps with coupons are valued by Scott's catalog at $6,000.” (https://oldbid.com/news/coins-stamps/most-expensive-stamps-of-israel/)

"Israel’s Postal Service began to function on May 16, 1948, the day after the State was established.

Two weeks earlier, the Jewish leaders in Palestine, preparing for the possibility of Jewish independence, began to plan stamps for the practical needs of a postal service. Usually, it takes months to produce a stamp, for the designing, the choice of colors, the technical work are all complex and time-consuming. The Jews in what was then still Palestine managed to bring out a stamp in less than twelve working days." (https://israelstamps.com/our-fields/israel-stamps/)

Also, with large Jewish diaspora, there is a number of philatelists interested into Israeli issues, especially early-days ones. With that in mind, it’s no wonder that all stamps on our list date back to 1948, the year Israel was established as a state.

All stamps have denomination in mils. "The British Mandate of Palestine was created in 1918. In 1927 the Palestine Currency Board, established by the British authorities, and subject to the British Secretary of State for the Colonies, issued the Palestine pound (£P) which was legal tender in Mandate Palestine and Transjordan. £P1 was fixed at exactly £1 sterling. It was divided into 1,000 mils.

And now let’s take a look at the piece that achieved the highest price. That is the beautiful postage dues stamp sheet also dating back to 1948.